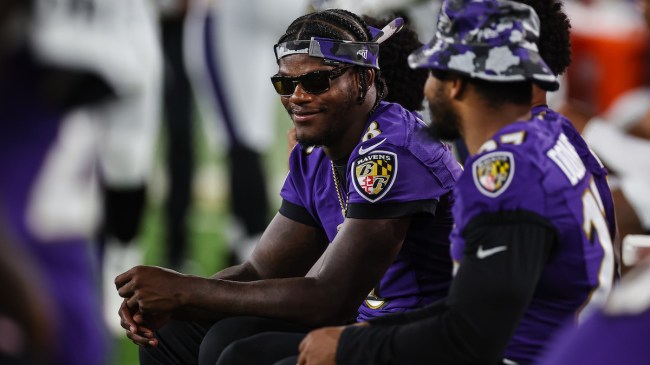 Another week of the NFL preseason has passed and it’s one less week for the Baltimore Ravens to reach a new agreement with quarterback Lamar Jackson.

The dual-threat star quarterback is set to hit free agency following the 2022 season and has stated contract negotiations with the Ravens will stop once the regular season begins. Not much has been revealed from talks, but reports suggested the Ravens were offering more than Kyler Murrary’s 5-year, $230.5 million extension.

With two weeks left until the self-imposed deadline, an agreed-upon contract has yet to surface. It appears the 2019 NFL MVP wants a fully guaranteed deal similar to Deshaun Watson. Initial reports speculated that the Ravens wouldn’t offer such a deal and Jackson has now seemingly confirmed it.

It all started on Monday when a Twitter user called out the Ravens for not offering Jackson a massive $250 million guaranteed contract.

So @Lj_era8 is a league MVP and he STILL hasn’t broken the bank? @Ravens you’re on the hot seat, give that man the $250M GUARANTEED before you write a check your ass can’t cash 🤷🏾‍♂️

Another user chimed in by incorrectly claiming the offer had already been turned down and that’s where Jackson stepped in to clarify.

It seems the Ravens are holding firm in their decision not to offer an unprecedented extension to Lamar Jackson. The team could always change their mind though, as seen with the 49ers and Jimmy G. If the Ravens QB does hit free agency, there will be no shortage of teams looking to swipe him up.

Fans later noticed Jackson had liked a photo of himself in a Miami Dolphins uniform. It quickly brought on more speculation and he had to clarify once again. Even then, fans couldn’t shake the timing of it all.

Lamar Jackson is a proven talent in a league that is in desperate need of franchise quarterbacks. If the Ravens don’t offer what he wants, it’s likely some other team will.

The Ravens will start the season against the New York Jets on September 11th, which serves as the extension deadline. While Jackson remains in Baltimore for now, Ravens fans will hope an extension comes soon to keep him even longer.