The Lakers, Knicks And Jazz Are Reportedly Working On An Absolutely Massive Three-Team Trade 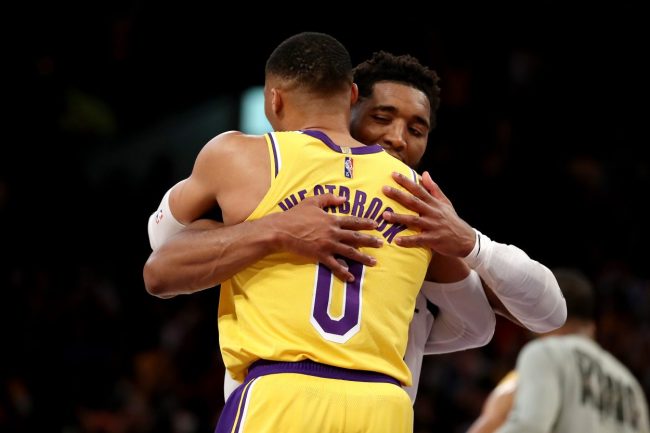 Buckle up, basketball fans. According to a report from Mike Scotto of HoopsHype, the Los Angeles Lakers, New York Knicks and Utah Jazz have engaged in talks about a massive trade.

Sources: The Lakers, Knicks and Jazz discussed a three-team trade with Donovan Mitchell landing in New York, Patrick Beverley and another key Jazz player to the Lakers, Russell Westbrook on the move, and draft picks to Utah. More details on @hoopshype. https://t.co/AejGhQPKVK

The trade centers around superstars Donovan Mitchell and Russell Westbrook. It would send Mitchell to the Knicks, Westbrook and draft picks to Utah, and the Lakers would receive Patrick Beverley, Jordan Clarkson and either Bojan Bogdanovic or Malik Beasley. The deal would also include Derrick Rose in order to make salaries work according to Scotto.

Scotto says that any deal involving Mitchell would cost the acquiring team and all involved a hefty price tag.

Scotto also notes that the deal was discussed weeks ago, though he notes that trade talks have continued. The Lakers have struggled to move off of Westbrook’s gigantic contract. Trade rumors have linked the former league MVP to the Brooklyn Nets in a deal involving Kyrie Irving going to LA. But Westbrook’s high price tag and low value have scuppered that deal. The Nets reportedly want multiple first-round picks from the Lakers.

Westbrook could also end up on the Knicks if recentl reports are any indication.

The #FreeBrittneyGriner movement is in full effect. And it just added a massive supporter. https://t.co/TNjqEKYplI

Either way, it appears the NBA the is in for a massive shakeup in the near future.