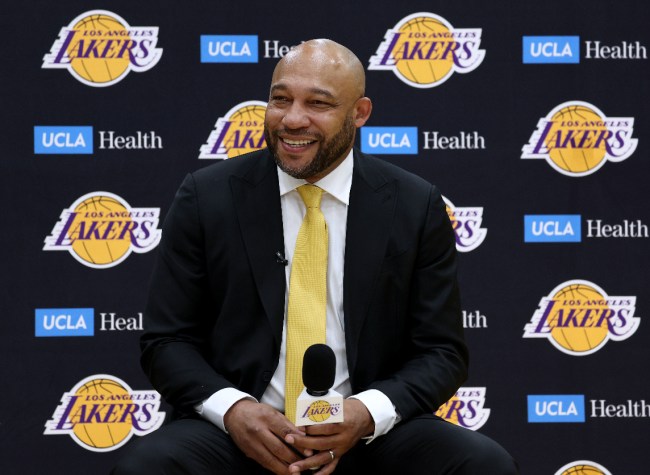 The Los Angeles Lakers are one of the biggest talking points of the NBA. With the Las Vegas Summer League underway, pictures surfaced of Rob Pelinka, Adrian Wojnarowski, and new head coach Darvin Ham chatting with one another.

But, as of now, nothing has surfaced. The tireless Kyrie Irving trade rumors have gone nowhere. Still, the Lakers youngsters are hopping in Sin City, and Ham and company are there to support and plan for the season.

The Charlotte Hornets defeated the Lakers on Sunday night in a sudden-death double overtime. But, it was Ham’s comments that got everybody going.

During the game, Ham hopped on and discussed his new team.

Of course, the topic of Russell Westbrook came up. With the Irving rumors circulating nonstop, Westbrook has received an unworldly amount of slander.

Darvin Ham: “I’m excited as hell to have Russell Westbrook on our team.”

Ham is “excited as hell.” He said so himself.

Unfortunately, most Lakers fans are pioneering and just waiting for the day the Irving trade is announced. So, as you’d expect, this didn’t go over too well.

Lakers really about to be stuck with Russ for the year https://t.co/a8anKKYrkB

Ham continued to rave about Westbrook.

Darvin Ham on Westbrook: “Russ in my opinion, he’s in great shape, he’s durable. And in this four out one in system, he’s going to have a chance to screen and roll and make plays in the half court. He’s going to have the chance run on the break, slash, get layups.”

Keep in mind that Ham wouldn’t publicly bash Westbrook, especially since there’s a chance the Irving trade doesn’t go through. What do we expect Ham to say?

Nonetheless, this might not be encouraging, although the smoke continues to build on a LeBron James-Kyrie Irving reunion.