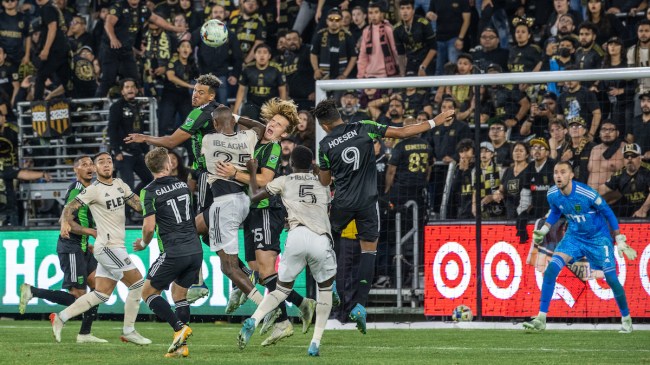 Both teams are fighting for the top spot on the table and it broke out into an actual brawl before the half. In the 38th minute, LAFC center-back Jesus Murillo sent Austin FC striker Maxi Urruti into the stands after shoulder-checking him on the touchline. Urruti retaliated by seemingly stomping on the LAFC defender’s foot.

Things escalated from there with Murillo providing theatrics any actor could appreciate. Players from both teams arrived in support and it quickly turned into a shoving match involving starters and subs.

Things got chippy between Austin FC and LAFC. pic.twitter.com/t6fnEHnJJb

LAFC goalkeeper Maxime Crépeau was first to the scene and got right up in Urruti’s face. ATX midfielder Diego Fagundez then shoved Crépeau and suddenly multiple players were involved in the messy melee. A giant scrum formed with all sorts of shoving, grabbing, and holding in the mix.

Some fans, however, thought Murillo also deserved a yellow for his impressive flop.

Embarrassing for LAFC player. Should be carded for that flop.

That flop was the most ridiculous thing ever seen on a football pitch.

Urruti would get the last laugh though as he scored two quick goals in the 47th minute and 51st minute. Austin FC would find the net again soon after in the 59th minute and the game would finish 4-1 in their favor.

Should these two teams meet in the MLS Cup Playoffs, fans can expect the tensions to be even higher.