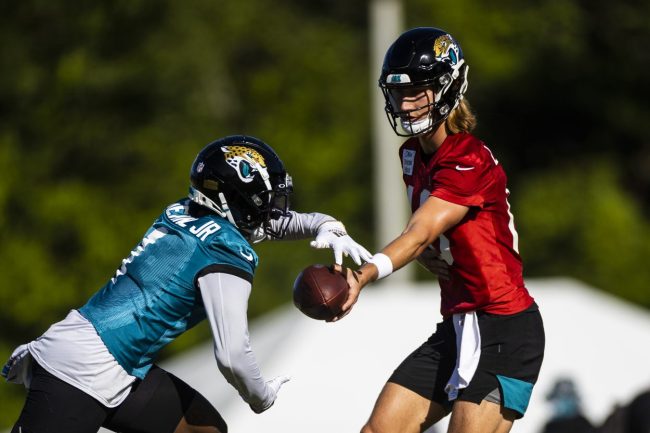 LaDanian Tomlinson knows a thing or two about being a successful running back in the NFL. Tomlinson was inducted into the Pro Football Hall of Fame in 2017 and is widely regarded as one of the best running backs of all-time.

Following his retirement, Tomlinson moved into an analyst role for the NFL Network and NFL.com. He recently put out a piece highlighting second-year backs that are set for breakout seasons. And one player in particularly stands out at the top of the list.

The Jacksonville Jaguars selected Travis Etienne with the first pick of the second round of the 2022 NFL Draft. The move paired Etienne with former Clemson teammate Trevor Lawrence, whom the Jags took at No. 1 overall.

Etienne struggled missed the entire 2021 season due to a mid-foot sprain, but now he’s back healthy and in a Doug Pederson offense that should allow him to flourish.

This is what Tomlinson had to say about the potential young star:

After missing all of his rookie year, Etienne will add some big-play ability to an offense that desperately needs it after finishing last in scoring a year ago. Already generating buzz in camp, he’s a threat running between the tackles and on the perimeter, running routes out of the backfield and lining up in the slot. Under new head coach Doug Pederson, Etienne will thrive from the shotgun formation just as he did at Clemson. He operates well in space with quick feet and great burst to go along with the rhythm, reaction and understanding of how to effectively run in shotgun sets

The Jags think so highly of Etienne that they’re holding him out of first preseason game against the Raiders.

Etienne isn’t the only running back Tomlinson has his eye on. New England Patriots’ bruiser Rhamondre Stevenson and Denver’s Javonte Williams also made the list.

Stevenson is downhill power back who ran for 606 yards and five touchdowns as a rookie. He’s a perfect fit for Bill Belichick’s system and should have a heavy workload alongside Damien Harris this season.

Williams, meanwhile, split time with Melvin Gordon and rushed for over 900 yards as a rookie. Like Stevenson, he’s well put together and his low center of gravity makes him tough to bring down.

With Etienne, Stevenson and Williams leading the way, the NFL looks plenty stock with young talent at running back.