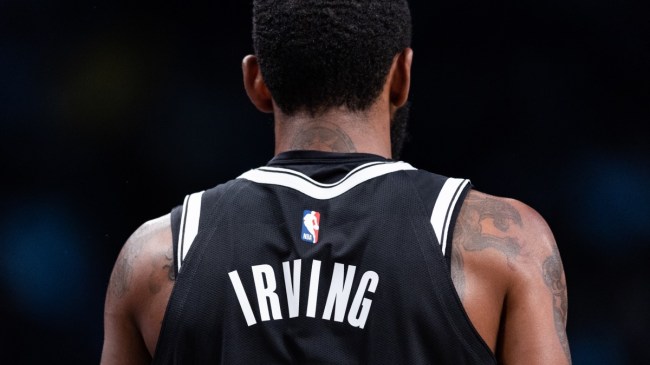 It’s been quite the week for the Brooklyn Nets and Kyrie Irving. After espousing anti-semitic rhetoric on social media and in interviews, Irving was suspended for at least five games by the Nets and owner Joe Tsai. Kyrie has since apologized for some of his actions, but he remains suspended.

Clearly, the Nets are in no hurry to bring him back. And, on Saturday, the criteria Irving has to meet to be allowed to play again were revealed.

On Saturday evening, NBA insider Shams Charania reported that criteria had been set for Irving’s return to play.

Sources: Nets have delivered Kyrie Irving six items he must complete to return to team:

Everything on there seems completely fair and within reason to require the point guard to do if he wants to play for the Brooklyn Nets again. Brooklyn has to be careful here, as New York City has a high Jewish population and the city as a whole is very supportive of that community. Alienating them by bringing back Irving would be a huge mistake.

It’s unclear if these are things that Irving agreed to do and if he had any input on what steps would be required of him. Bu, it is certainly a comprehensive list, and it shows the Nets are taking this issue seriously.

NBA fans react to the news

Of course, there are a lot of takes on this news. But, a lot of people think that Kyrie Irving will never play for the Nets again.

Well I guess Kyrie is done in Brooklyn… that man ain’t doing all that… he wouldn’t even get a Covid shot😭 https://t.co/b0v62fleNm

Can’t articulate my thoughts in a tweet, so I’ll just say I think Kyrie is done in Brooklyn. I don’t think this helps their organization and I think the team is headed for dysfunction.

Some think he may even retire.

I think Kyrie's career is over. He's not going to comply with any of this and nobody's going to sign him in the offseason when his contract is done. https://t.co/wSDzso631U

As for me, I hope to never hear from him again. He’s a loser player and a loser teammate.