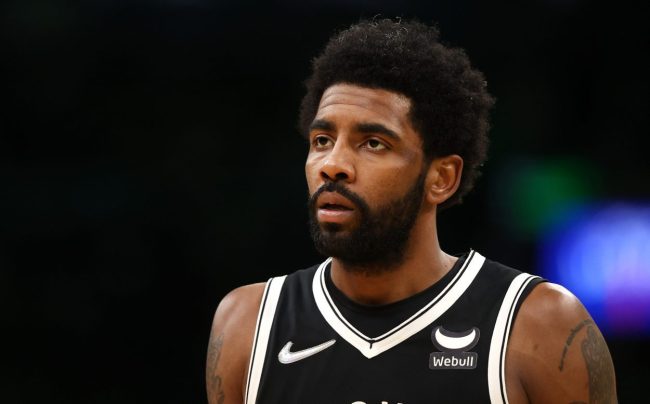 While teammate Kevin Durant is seemingly linked to just about every team in the NBA, Kyrie Irving might just be staying put for the foreseeable future.

Irving has been strongly linked to a move ever since the end of the NBA season. The Los Angeles Lakers are the one team constantly involved in those talks.

But now things have calmed down, and The Athletic’s Shams Charania reports that the Nets plan to keep Irving for the upcoming season.

A new Western Conference contender is expressing interest in Kevin Durant – fresh Inside Pass at @TheAthletic breaking down the latest on the Nets star:https://t.co/hprnn3hXj1

“All-Star Kyrie Irving also opted into his $37 million player option, committed to the 2022-23 season in Brooklyn and sources with knowledge of the situation say he has been working out with teammates and holding constructive dialogue with the organization this offseason. Brooklyn has made clear to interested teams that they plan to keep the seven-time All-Star, according to sources.”

Brooklyn is reportedly looking to build around Irving and the returning Ben Simmons. Simmons missed the entire 2021-22 season. He began the season in a standoff with the Philadelphia 76ers allegedly over his mental health. Philly then traded Simmons to the Nets in a deal for James Harden. The young Aussie missed the rest of the season with a back injury, even reportedly ghosting teammates during that time.

Charania reports that the three-time NBA All-Star is nearing a full return.

“Simmons has been cleared for three-on-three basketball activities following back surgery in May, and he is on track to be cleared for full five-on-five activities in the coming weeks, league sources say. The Nets and Simmons expect him to be ready for training camp in late September.”

KD and Ja?! It might be a wrap for the league if they let this happen. https://t.co/biYJMCDWmb

It’s entirely possible the Nets are posturing in order to extract more value in an Irving trade. For now, though, it appears they’re set on moving forward with their two controversial stars.