New York Knicks Fans Had To Choose Between Kyrie Irving and Jalen Brunson, And The Choice Was Clear 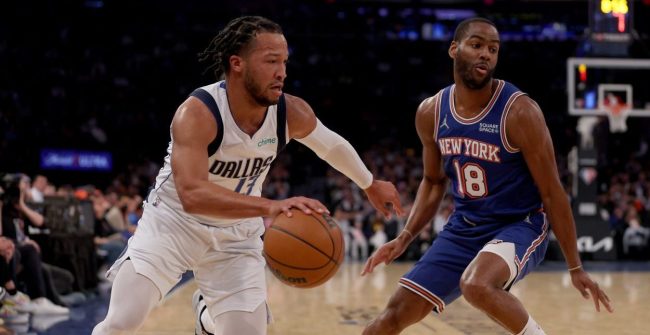 For months, the New York Knicks have been considered one of the front runners to land free agent guard Jalen Bruson should he leave the Dallas Mavericks.

In fact, the Knicks are so infatuated by Brunson that they may have structured their entire NBA Draft around his pursuit.

But what if Bruson re-signs with the Mavs? Then what?

Could New York be tempted to explore options for another star guard? Maybe even one that plays just a handful of miles away? The Knicks could very well turn out to be suitors for Brooklyn Nets malcontent Kyrie Irving if a report from Shams Charania of The Athletic is to be believed.

The Nets have officially given Irving the okay to seek a sign and trade deal. Though New York may not actually be interested. In fact, ESPN’s Adrian Wojnarowski is reporting that the Lakers are the only team currently pursuing a sign-and-trade deal for Irving.

In addition to the organization seemingly not pursuing Irving, it appears fans don’t want him either. FoxSports NBA writer Yaron Weitzman put out the following poll on the Twitter.

The results thus far seem clear, with 58 percent of respondents choosing Brunson as of Monday afternoon.

id rather have brunson on a supermax https://t.co/qSoL8WQzxa

Let me rephrase
Do you prefer a 25yo rising star with insatiable appetite for hard work & winning VS a 30yo condescending pseudo intellectual diva with repulsive personality, penchant for alienating teammates and proneness for spewing vacuous statements degrading fans and media? https://t.co/JvOD1O1P37

Not the guy who’s ruined the last couple teams he’s been on https://t.co/4kau7avmud

Though not everyone was convinced. Some were amazed that Irving wasn’t the clear choice.

Regardless of where he ends up, Irving continues to be one of the league’s most polarizing figures.