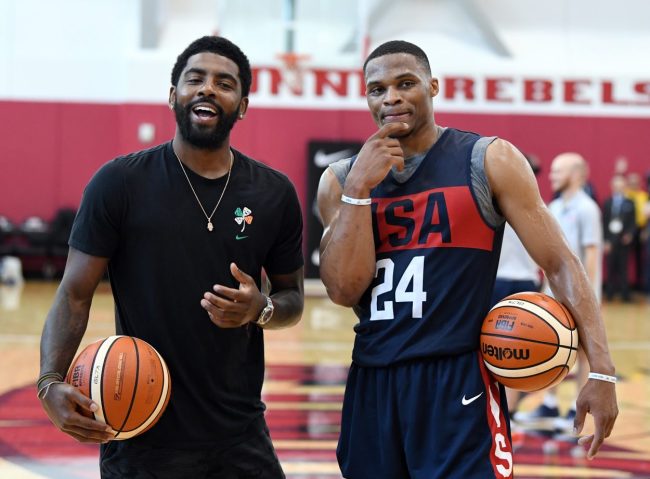 Kyrie Irving might just get his wish after all.

The Brooklyn Nets malcontent has reportedly been pining for a trade, and not just any trade. Irving wants to join the Los Angeles Lakers and once again team up with LeBron James.

The only problem? According to Shams Charania of The Athletic there is “no traction” on a deal between  the Lakers and the Nets. But ESPN insider Brian Windhorst did offer Irving a ray of hope on Thursday.

“Kyrie Irving absolutely wants to be a Los Angeles Laker… I doubt Kyrie will be back with Brooklyn, I think he’ll be on the Lakers, but I don’t know when that’ll happen.”

That small ray of hope got even bigger thanks to a report from Bleacher Report’s Eric Pincus late Thursday night.

"The Brooklyn Nets and Los Angeles Lakers have held preliminary discussions on a Kyrie Irving trade, and sources indicate the teams are exploring the potential of pulling the San Antonio Spurs into a multi-team deal."https://t.co/EfAeLqV2WS

Pincus is reporting that Los Angeles and Brooklyn have engaged the San Antonio Spurs about a three-deal trade. That move would re-route Russell Westbrook’s enormous salary to San Antonio, which would create a significant trade exception for the Nets. The Spurs would then reportedly discuss buying out Westbrook.

Of course, San Antonio wouldn’t be doing this out of the goodness of its heart. The Spurs are expected to receive significant draft compensation should the move go through.

The current move involving just the Lakers and Nets is supposedly hung up over the Lakers’ refusal to take on Joe Harris, instead wanting to land Seth Curry in any potential deal.

Another new wrench in the trade is that Brooklyn apparently covets Spurs center Jakob Poetl, who they’d pursue in the reported trade. San Antonio is reportedly willing to move off of Poetl as well as fellow veterans Doug McDermott and Josh Richardson as it continues to rebuild post-Dejounte Murray trade.

Things appear set to get even spicier in the NBA offseason.