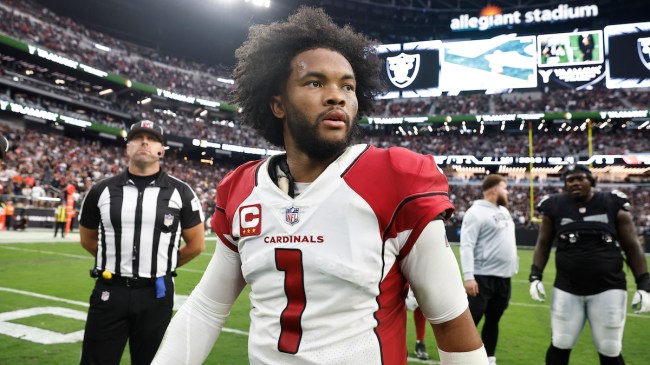 The Arizona Cardinals delivered a thrilling OT victory over the Las Vegas Raiders in Week 2, but it wasn’t without some drama after a video surfaced showing a fan allegedly slapping Kyler Murray in the face.

The Cardinals overcame a 20-point halftime deficit to push the game to overtime. Then cornerback Byron Murphy delivered a 59-yard scoop and score to solidify the Raiders’ largest blown lead in franchise history.

With the improbable comeback completed, Murray and his teammates ran to the stands to celebrate with fans. In all the chaos, one fan appears to strike the Cardinals QB directly across the face. The clip went viral with a debate around whether the action was intentional.

Here's a slowed down version of what happened between Kyler Murray and a fan after Sunday's game in Las Vegas: Keep an eye out around the 16-second mark.

Great work by @CamCox12 who captured the entire ending on video.

Murray appears heated in the moment and storms back towards the fan. That same fan then slaps his shoulder pads the second time around, so it’s difficult to say whether the strike to the face was malintent.

The initial videos circulating don’t offer the best view either. More angles of the fan’s alleged slap surfaced and still didn’t offer any more clarity. Las Vegas PD is reportedly investigating the altercation, but no findings have been released.

On Wednesday, Murray himself was asked about the incident by reporters. It seems he’s not the type to hold any grudges.

“No hard feelings towards the guy.”

Kyler Murray on the fan that smacked his face after the Arizona Cardinals OT victory in Las Vegas pic.twitter.com/wYG7akw07J

“Stuff happens fast… I know every person I’ve hit in the face, I did it for a reason. I don’t know if he probably didn’t know where he was, so I don’t know. It was a pretty live game. Vegas is Vegas. I’m sure he was having fun, but again I don’t know.”

The Cardinals QB seemingly brushes off the situation as not too serious. While he doesn’t know what the fan’s motivations are, he makes a fair point that hitting someone in the face isn’t usually an accident.

Given how several fans were reaching out and swinging their arms in the celebration though, it very well could’ve been unintentional in this case.

Ultimately, Murray cuts the fan some slack. Emotions were high in the moment and he could’ve gotten carried away. So there’s no bad blood in the end.

However, Murray does emphasize that fans shouldn’t interact with players in that way nonetheless.

“I don’t think any player should be touched in that manner, but no hard feelings toward the guy. If I see him, I’d shake his hand. But it is what it is.”

It’s a mature move from the young quarterback and likely means no further action will come from the incident.

Kyler Murray signed a massive contract extension during the off-season, so the team won’t enjoy seeing him take these kinds of hits. Albeit, it’s probably not the type they were expecting.

The quarterback has no plans for staying away from fans during celebrations though. Hopefully, they will act with a bit more responsibility when the Cardinals take on the Los Angeles Rams in Week 3.