Kyler Murray Has Had Enough Of The Comments About His Work Habits, Says They’re “Almost A Joke” 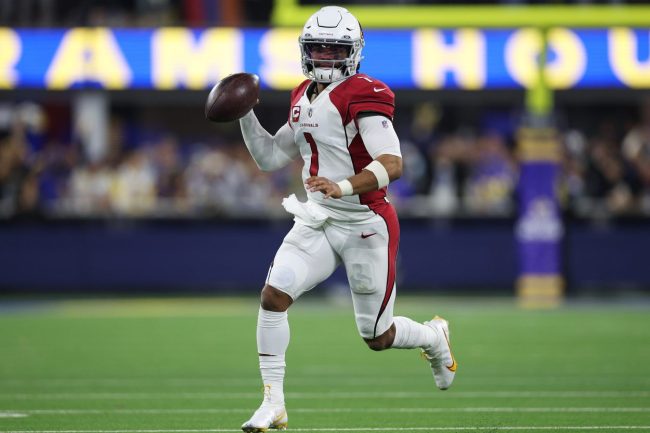 By now, most NFL fans have heard about the unusual clause submitted into Kyler Murray’s gigantic new contact with the Arizona Cardinals.

Murray signed a five-year, $230 million deal with the Cardinals last week that makes him the second-highest paid quarterback in the league behind Green Bay Packers star Aaron Rodgers.

But when details of the contract came out, it became clear that Arizona had one very clear concern about Murray. Buried in the text of the deal was a clause that required Murray to complete four hours of “independent study” a week on a device provided by the team. The Cardinals will then monitor that device to ensure Murray is following the terms of the contract.

It was the first such clause that many around the NFL had ever seen.

Never seen this in 30 years of looking at NFL contracts.
Strange they’ll give him $46 million a year (on extension years) yet worry about 4 hours a week of studying. https://t.co/Crxc3jaJrM

Now Murray is hitting back. He took to the podium to speak with media at Cardinals training camp Thursday morning and had this to say about the speculation:

Kyler Murray with the surprise appearance with the media.

It’s “disrespectful … almost a joke” that people could think he could’ve accomplished what he has without studying and preparing for the game.

“This game is too hard” to do otherwise.

Kyler declined to answer a question if he was mad at the team for the contract clause.

Kyler did say he was “flattered” that people could think he could have this much success without preparation for the game.

Murray’s discontent is understandable. He’s lit up the league in his three seasons since being draft No. 1 overall in the 2019 NFL Draft. Murray made the Pro Bowl in each of the last two seasons and led the Cardinals to the playoffs this past season. Though he struggled mightily in Arizona’s lone playoff game against the eventual Super Bowl champion Los Angeles Rams.

Though even Murray himself is on record as not being much of a film watcher.

Last year, Kyler Murray told the @nytimes that he doesn't spend extensive time watching film because he's "blessed with the cognitive skills to just go out there and just see it before it happens." https://t.co/fCJTgGBLYV

Fans were also pretty skeptical of his latest comments.

what exactly has kyler accomplished?

with all due respect, what has he accomplished?

Murray will have a chance to prove all the doubters wrong when the Cardinals start their season on Sept. 11 against Patrick Mahomes and the Kansas City Chiefs.