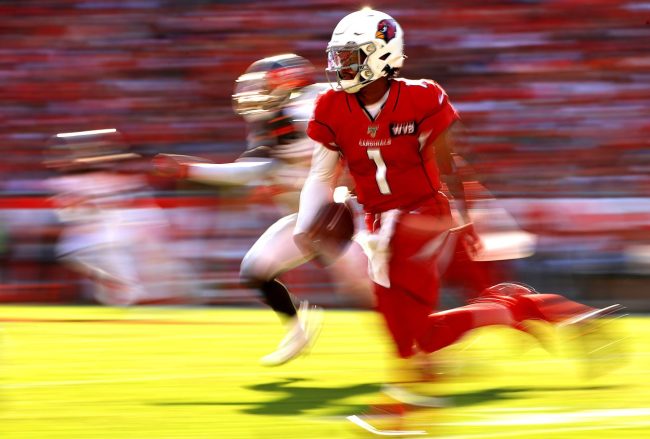 Kyler Murray doesn’t have to worry about holding out any longer.

The Arizona Cardinals Pro Bowl quarterback skipped organized team activities earlier this summer. But now he has been rewarded with an absolutely immense new contract.

NFL front office members recently rankied Murray outside the top-10 quarterbacks in the NFL.  But that doesn’t seem to bother the Cardinals. The team locked in their franchise QB with a deal that checks in behind only Green Bay Packers signal caller Aaron Rodgers in average annual value. Murray’s deal is just slightly higher than the one Deshaun Watson signed with the Cleveland Browns earlier this offseason.

Arizona selected Murray with the No. 1 overall pick in the 2019’s NFL Draft. Since then he’s made the Pro Bowl twice in three seasons. Murray also led the Cards to the playoffs for the first time in his career in 2021.

Murray does have his detractors, however. The fourth-year quarterback threw for just 70 touchdowns to 34 interceptions in his first three seasons. Though he did add 20 touchdowns on the ground in that time frame. Some fans also worry about Murray’s size.  At 5-foot-10, 207 pounds, there are concerns over how he’ll hold up in the NFL long-term. Murray missed three games due to an ankle injury suffered in 2021.

Each of those has led to fans criticizing the Cardinals over the absolutely monumental new deal.

Kyler Murray is not worth this much money….this however is where the NFL now lives.

What an absolutely absurd deal for the @AZCardinals https://t.co/PntgXUmyuo

Joe Burrow And Lamar Jackson Are About To Get PAID

As often happens, the deal will also likely reset the market on quarterbacks. That could serve as a could thing for star quarterbacks Joe Burrow and Lamar Jackson, who are up for new deals in the coming years.

The Cardinals are now locked in with their rising star quarterback long-term. But whether or not that’s a good thing is yet to be seen.