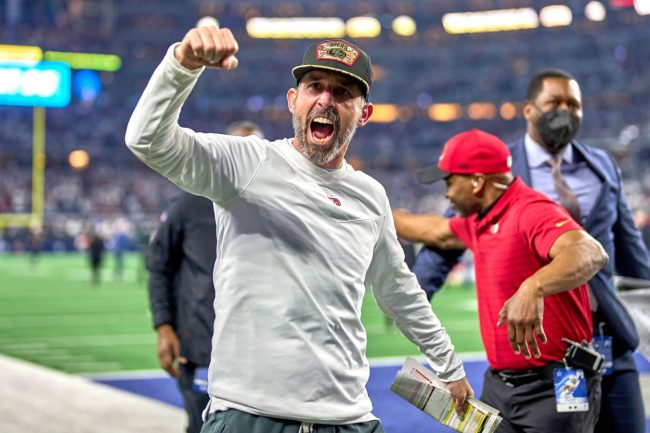 San Francisco 49ers head coach Kyle Shanahan has had quite the eventful offseason. First, Shanahan and Niners general manager John Lynch had to focus on keeping do-it-all wide receiver Deebo Samuel. Then Shanahan had to deal with his team consistently starting fights during training camp. Finally, Shanahan and Brandon Marshall talked about the inner workings of his play calling and what his go-to play call is.

Just when things appeared ready to settle down for Shanahan and the 49ers, the sixth-year coach went and decided to pick a fight with the NFL.

But this wasn’t your ordinary fight. It wasn’t about rules, or play calls, or schemes. No, Shanahan is annoyed with the NFL over hats, and with good reason.

49ers head coach Kyle Shanahan said on the Murph and Mac podcast that the NFL isn’t allowing him to wear any of his old hats, as he can only use new and approved San Francisco hats this season.

Shanahan has become associated with his gameday flat-brimmed hat look. But this year, it appears he can’t seem to find a hat he likes. That’s a problem, because the NFL won’t allow him to wear any gear from previous years.

“I have such beef with them right now,” Shanahan told Yahoo Sports. “It’s a tough issue going on. They won’t let me pick out my own [hat]. They won’t let me wear any one that’s from a [previous] year, so I can’t wear like an older one. I’ve got to wear the new ones that they give this year. Unfortunately, there’s none I like wearing. Hopefully, we can figure it out or wait until Salute to Service. … It’s just deals. I don’t want to go too hard and get fined or anything but trust me, I’m upset about it.”

It's gonna take a little more than that to rattle Miami Dolphins QB Tua Tagovailoa. https://t.co/Fuw9kH9uxv

Shanahan has exactly one month to find a fat that he likes before San Francisco travels to Chicago to take on the Bears to start the NFL regular season.