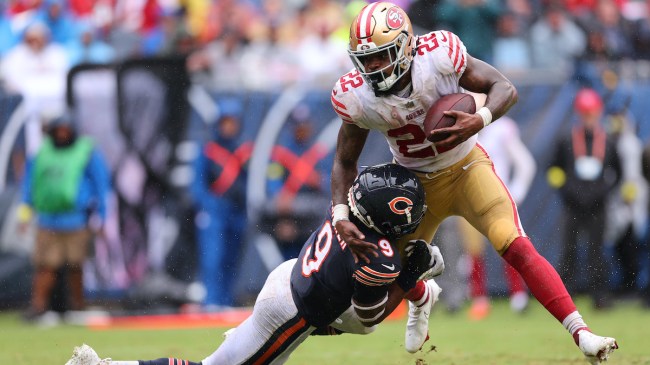 With Elijah Mitchell out for the foreseeable future, the San Francisco 49ers need a new running back to step up and head coach Kyle Shanahan has provided some hints on how that decision will be made.

The 49ers’ original starting RB went down with an injury early in the 2nd quarter of Sunday’s 19-10 loss to the Chicago Bears. It was later revealed that Mitchell suffered an MCL sprain, earning him a spot on the IR list.

Jeff Wilson Jr. is the excepted RB1 replacement given Mitchell is ruled out for roughly two months. Rookies Ty Davis-Price and Jordan Mason are also on the roster and Marlon Mack was recently signed to the practice squad.

It’s currently unknown who will serve as RB2 against the Seattle Seahawks and it seems Shanahan will use this week’s practice to make the decision. Even then, he’s making no guarantees on who gets the ball once the players step onto the field on Sunday.

On 49ers RBs, Kyle Shanahan said he'll get a feel for how guys do in practice and "go with the hot hand in the game."

All signs point towards Wilson Jr. starting. He’s the most veteran of all the running backs and has recently served as the 49ers’ third down back. He also slotted into the main role against the Bears after Mitchell went down.

Shanahan is still a big fan of the two rookies, who beat out Trey Sermon to remain on the roster. This week’s competition will mostly be focused on them fighting for the backup role.

“Yeah for the most part. That’s what it was last week. We knew it was just gonna be special teams [for the backup]. This week, we’ll get a feel for them on these three days, and then we’ll go with the hot hand in the game.”

However, Shanahan’s last remark can be worrisome for Wilson Jr.’s fantasy owners. It seems the 49ers could be headed towards a running back by committee approach.

Wilson Jr. only mustered 22 yards on 9 carries in the soggy Soldier Field conditions. If he can’t find better production against the Seahawks, the 49ers will likely feed one of the rookies instead. Plus, Deebo Samuel is always in the mix for taking on more carries.

The 49ers will miss Mitchell during his 8-week absence, but the team should be used to RB injuries at this point. Luckily, it seems Shanahan has full confidence in the running backs he has remaining.

As for fantasy football players, it might be best to fade the 49ers running backs for now at least.