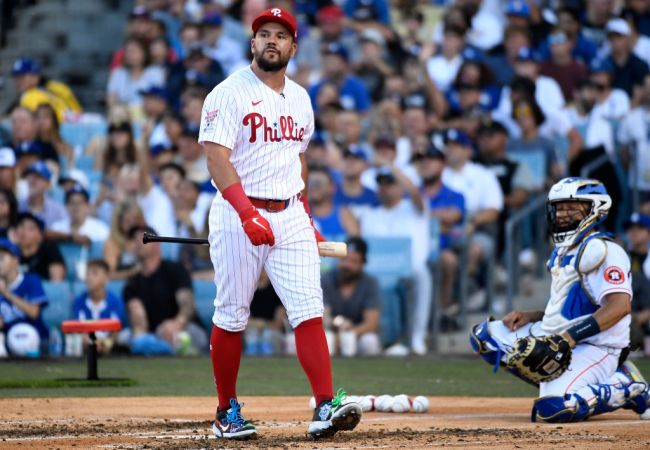 With a new derby-related tiebreaker format debuting for the 2022 MLB All-Star game, all eyes were on Monday night’s Home Run Derby. And the MLB’s annual event put on quite the show for fans in Los Angeles this year.

Washington Nationals right fielder Juan Soto was the big winner of the night, but Seattle Mariners rookie Julio Rodríguez stole the show with impressive performances in his first two rounds. Elsewhere in the bracket, both Ronald Acuna and Cory Seager struggled to go yard with first-round exits from the competition.

What fans may have missed is some controversy from the first-round matchup between No. 1 seed Kyle Schwarber and No. 8 seed Albert Pujols.

With 11 seconds left in Schwarber’s turn during overtime, ESPN announced his 17th and 18th home runs, but the official count only increased by 1. To make matters worse, the unfortunate slip-up resulted in a first-round loss by just one home run for the Philadelphia Phillies left fielder. What a bummer!

Robbery in the Ravine. pic.twitter.com/luIhUuWiRa

Schwarber didn’t seem to take the loss too hard though, even bowing down to the 42-year-old Pujols once the round finished. Fans and sports bettors, on the other hand, were livid with the supposed blunder.

But whether ESPN actually made a mistake is up for debate. Internet sleuths were quick to point out that the error may have actually come from the announcers instead.

Incorrect. When the announcer calls for number 17, that actually falls short and is caught by a kid in the field. The ticket is right, the announcers were wrong.

As it turns out play-by-play commentator Karl Ravech was the one to blame for all the confusion. The announced 17th home run for Kyle Schwarber never actually made it past the outfield fence. Case solved and the result stands.

Poor announcing seemed to be a common occurrence through the night, so at least Schwarber had some company in that aspect. And with 29 home runs in the season so far, he’ll happily save his bat for when it matters as the season continues.

Can Karl Ravech and Eduardo Perez see the field?