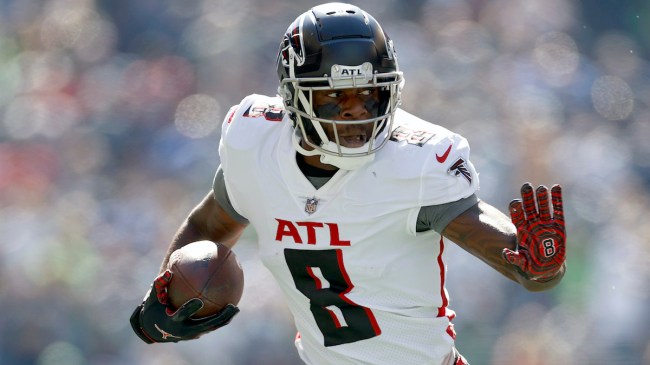 Friendly wagers between professional athletes are always a fun sight to see, but Atlanta Falcons TE Kyle Pitts might disagree after a recent bet with his teammate Cordarrelle Patterson.

It just so happened the Gators faced the Volunteers on Saturday and the three placed a hilarious wager on the game. Whoever’s team lost would have to wear team gear from the opposing school. Unfortunately for Pitts, he paid the price for supporting his alma mater.

Kyle Pitts lost the Florida-Tennessee bet and paid the price 😂

The Volunteers defeated the Gators 38-33 and a pair of Tennessee-colored overalls were waiting for the Falcons TE on Wednesday. Patterson posted a photo to Twitter showcasing the amusing outfit.

Apparently, Pitts wasn’t even aware that that specific outfit would be the result of the bet. He showed up at the Falcons facility on Wednesday and the overalls were already waiting in his locker (h/t Michael Rothstein of ESPN).

“They put me in overalls. I think that’s the worst part. Overalls.”

Pitts obviously wasn’t a fan of the outfit, but at least he was a good sport about it. Perhaps he’d have a different opinion on the overalls if they were orange and blue instead.

The weekend wasn’t all bad for Kyle Pitts though. He led the Falcons with 5 receptions for 87 yards in their first win of the season over the Seattle Seahawks on Sunday. They’ll look to carry that momentum into the next week against the Cleveland Browns.

As for Pitts’ alma mater, the Florida Gators will look to bounce back after falling to 2-2 on the season with both losses at the hands of SEC East opponents.