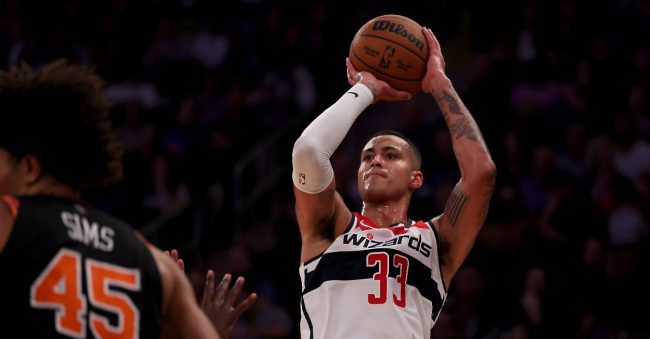 The NBA is fully entrenched in the quietness of the offseason. Yes, trade rumors have been circulating, and they picked up again with another Kevin Durant bombshell.

So, it has been relatively quiet. On the other hand, we have seen a number of NBA players make their way to the Pro-Am games and the Drew League.

Malachi Flynn put on a show at a Pro-Am, and LeBron James headed over to the Drew League and put on a show as usual. We now have another NBA player who dominated in a Pro-Am: Washington Wizards forward Kyle Kuzma.

Toronto Raptors youngster Scottie Barnes was on the other team at the Pro-Am, so it wasn’t just Kyle Kuzma playing. Barnes also put on an impressive performance.

I am lucky enough to be here to watch Scottie Barnes in this Pro-Am game.

Kuzma played college basketball at Utah, so it was reassuring for many fans to see him return to the state and put on a spectacular show.

Kuzma’s name floated around in trade rumors once again — something he is getting used to. But he is still with the Wizards and looking to put together another strong season. He is fresh off a 17.1 PPG season in Washington, his second-most of his career, second to his 18.7 PPG season in 2018 with the Lakers.