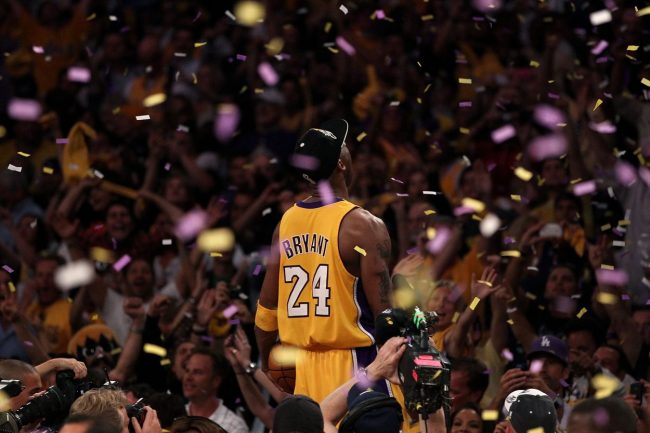 Tuesday marks what would have been the 44th birthday for Los Angeles Lakers legend Kobe Bryant. Bryant as well as his daughter daughter Gianna and seven others tragically lost their lives in a helicopter crash on Jan. 26, 2020.

The five-time NBA champion has a laundry list of accolades. He made a jaw-dropping 18 NBA All-Star games. He made first-team All-NBA 11 times, including his NBA MVP season in 2008. Bryant won the NBA Finals MVP in both 2009 and 2010 he was an easy choice for the NBA’s 75th Anniversary Team.

His legacy extended far beyond the court as well. He wan an idol to a number of today’s top stars. That list includes Jayson Tatum, Devin Booker, and Chicago Bulls’ star DeMar DeRozan. The latter of which recently inked a deal to become the face of Bryant’s shoe line with Nike. Bryant’s popularity has continued to soar since his death as well. The Philadelphia native recently had one of his rookie trading cards sell for a jaw-dropped $1.8 million at auction. That’s the most any Bryant card had ever gone for.

Give his impact on the game of basketball and his legacy in the hoops community, it was no surprise to see basketball Twitter go all out to remember him on Tuesday.

Happy Solar Return, and 🥂’s to you.

You and all the angels celebrate up in Paradise!

The Black Mamba lives on…..♾

Happy birthday to the GREAT @kobebryant miss you killa!!! pic.twitter.com/CwctMV6Llb

Forever in our hearts.

Perhaps no player since Michael Jordan left a bigger impact on not just the game, but the culture of basketball than Bryant did. His aura and impact have continued to grow since his shocking death.

Kids these days don't want to play any defense. https://t.co/u21Qwaaemo

Bryant may no longer be around to celebrate, but the basketball community clearly has no plans of forgetting the hoops legend.