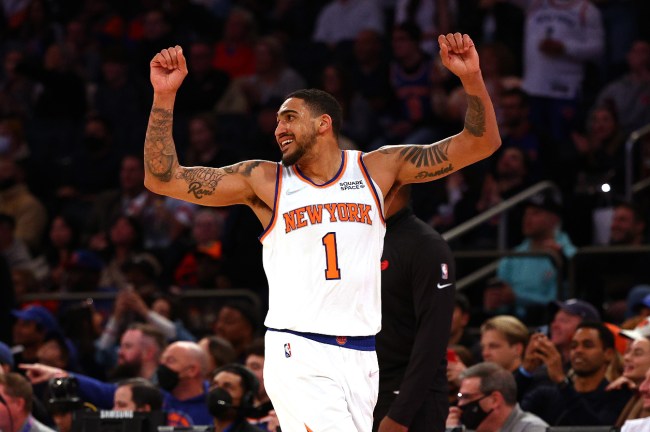 The New York Knicks are kicking off a new era in Madison Square Garden. Well, somewhat.

After rumors swirled about making a monster move in free agency, they immediately inked former Dallas Mavericks guard Jalen Brunson to a monster deal. Then, Donovan Mitchell became a trade target. For now, nothing has happened on that front, although the situation is very fluid.

Julius Randle is still around, and Obi Toppin is another Knicks player who they are hoping can take a giant step forward in 2022-2023.

A video surfaced of Brunson and Toppin playing basketball together, and Knicks fans couldn’t help but get excited about this.

Toppin has had a challenging career since being drafted by the Knicks after a stellar run at Dayton. In 2021-2022, he averaged nine points per game in 72 contests, and in his rookie season, he averaged just 4.1 PPG in 62 games.

But, perhaps 2022-2023 is the year he takes a giant leap forward. After all, we all know how talented Toppin is.

On the other hand, Brunson is a rising star, which is why the Knicks spent over $100 million to bring him to New York. Knicks fans saw this pairing and immediately went to celebrate (yes, even though it’s only August).

The oop was so effortless man can't wait https://t.co/uDFTCallH9

JB and Obi are tough. https://t.co/ODDv7UqELh

The pressure is on again for the Knicks, and if the Brunson experiment fails, things won’t go over well for the franchise and the fanbase.