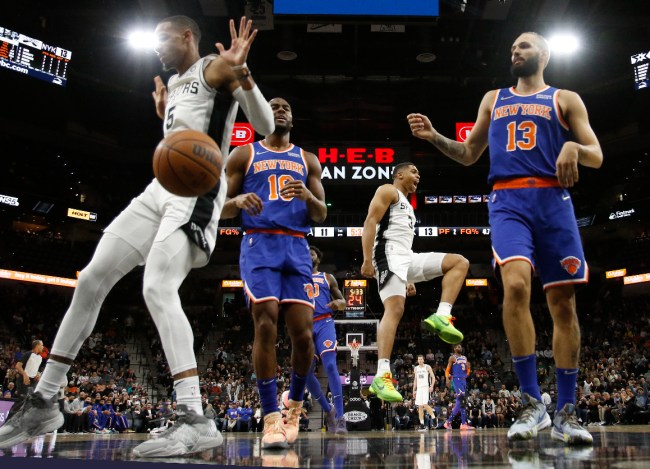 The NBA rumor mill is tireless and endless. Finally, the Kyrie Irving drama is over (for now). John Wall looks to be headed to the Los Angeles Clippers, and who knows what happens with Kevin Durant and Deandre Ayton.

But, one of the bigger names in the trade market is San Antonio Spurs All-Star point guard Dejounte Murray. The former Washington Huskies star has been linked to a number of teams, with the Atlanta Hawks listed as the most serious contender for Murray’s services.

But, those talks have stalled a little bit, and now the New York Knicks are reportedly seriously interested in the Spurs All-Star, according to Ian Begley of SNY.

The Knicks are among the teams who have expressed interest in acquiring Dejounte Murray via trade.

That would be a massive addition for the Knicks, even with the presumed deal for Dallas Mavericks guard Jalen Brunson.

The Knicks Would Love A Dejounte Murray-Jalen Brunson Duo

The Knicks have been aggressive this offseason, including recently dumping Kemba Walker on a draft-night deal, then trading away Alec Burks and Nerlens Noel in some cost-cutting moves.

As Begley also mentions, some in the Knicks organization don’t love the idea of Evan Fournier in the backcourt with Brunson, so adding Murray would be a tremendous boost all around.

The Spurs point guard is coming off a career season and was named to the Western Conference All-Star team for the first time in his young career. Sure, it would cost the Knicks a lot, but they have a ton of draft picks to work with, and clearly Leon Rose and company are trying to right the ship again.