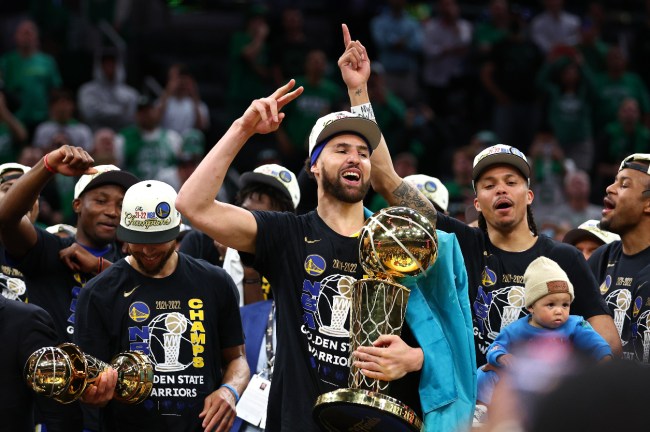 The Golden State Warriors got it done.

After defeating the Boston Celtics, 103-90, in Game 6 of the NBA Finals, the Warriors got to hold up the Larry O’Brien Trophy — in Boston, of all places.

Stephen Curry FINALLY won his first NBA Finals MVP Award, and the night was full of celebration for the Dubs.

Curry brought up receipts. Draymond Green also mentioned some statements made during the season.

However, Klay Thompson was visibly frustrated by one Tweet from Memphis Grizzlies star Jaren Jackson Jr. earlier in the season and made sure to mention it while celebrating the Finals victory.

Here’s what Jackson Tweeted out after the Grizzlies defeated the Warriors at the end of March.

The Grizzlies won in convincing fashion that night, 123-95. However, funny enough, neither Klay or Jackson suited up for that game.

Nonetheless, Thompson made sure to mention it on Thursday night and he was still not happy about it.

“There's this 1 Grizzlies player who tweeted 'Strength in Numbers' after they beat us in the reg. season. It pissed me off so much. I can't wait to retweet that thing. Freakin bum.”pic.twitter.com/6c5mbiS6fG

We know that Curry dubbed himself as the Petty King, but Klay might have made a pretty significant move up the rankings after bringing up this Tweet and ripping Jackson to pieces.

All year long, the Warriors were counted out. Klay battled back from a pair of devastating injuries, and receipts came pouring out at a rapid rate. This Tweet, specifically, has been living in Klay’s head for quite some time.

All in all, the Warriors are NBA Champions, and it will be must-watch TV whenever the Warriors and Grizzlies play each other next season.