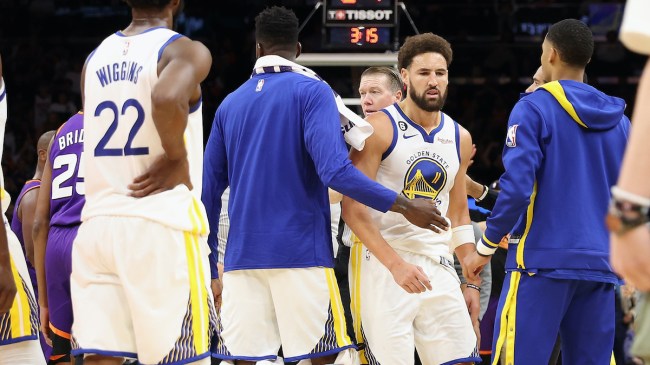 Four games into the 2022-23 NBA season and fans already got a taste of some playoff-level intensity during Tuesday night’s game between Golden State Warriors and Phoenix Suns.

Things got chippy during the third quarter of the game with Draymond Green, Steve Kerr, Chris Paul, and Deandre Ayton all receiving technical fouls. Then All-Star guards Klay Thompson and Devin Booker continuously chirped one another, eventually resulting in a double technical.

With players from both teams stepping onto the court, NBA officials led a heated Thompson away. However, the Warriors star continued venting his frustrations, earning a second technical and his first career ejection.

Thompson, who was drafted in 2011, played 759 regular season/playoff games through 10 seasons until his first ejection. It was a fitting way to cap off his overall rough night, where he shot 1-for-8 from the field and 0-for-5 from the 3-point line.

In contrast, Booker delivered an impressive performance with 34 points in the Suns’ victory. After the game, he actually shared his admiration for the Warriors guard’s competitive nature.

“He repeated it over and over.”

While the reigning NBA Champions may have been the better team in recent years, the Suns were the better team on Tuesday night. They went on an 11-0 run following Thompson’s ejection and won comfortably 134-105.

The 3rd quarter of the game remained the highlight of the night with 7 total technicals. It was the most in a quarter in the NBA since the 1996-97 season.

It certainly appears Dub Nation has another matchup to look forward to along with the Grizzlies-Warriors rivalry. After the intensity displayed on Tuesday, fans won’t want to miss when the Suns and Warriors meet again on Nov. 16th.