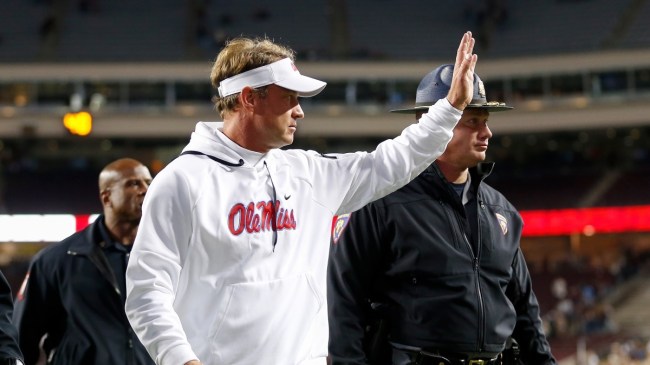 Lane Kiffin has emerged as one of the best coaches in all of college football. Left for dead after getting fired by USC on the tarmac at LAX in 2013, he went to the Nick Saban School of Coaching Reform and became his star pupil. After excelling as the offensive coordinator at Alabama, he went to Florida Atlantic before landing the Ole Miss job. All he’s done there is win 19 of his last 23 games and Ole Miss controls its destiny for a national championship and will host Alabama on November 12 for what could be a de-facto SEC West title game.

On the other hand, Jimbo Fisher is having a much rougher go of it. After Ole Miss racked up 390 rushing yards en route to a 31-28 road win over Texas A&M, the Aggies are now 3-5 and are missing a bowl game right in the face. This is despite being one of the most talented teams in America. And, after the game, Lane Kiffin took some shots at Fisher.

Kiffin had some pointed comments for Fisher

First, in the post-game interview, Kiffin took a few shots at the Aggie head coach.

“Maybe Jimbo has a Joker outfit for me.”

In the offseason, Fisher had called Kiffin and Saban clowns for their comments about Texas A&M’s program. Kiffin had the last laugh.

Lane Kiffin on Jimbo Fisher calling him and Nick Saban clowns during the offseason:

“You take that personal. Glad we won.

“I guess I can be a clown for Halloween now.”

Hard to imagine a bigger disparity in likability between Lane Kiffin and Jimbo Fisher. And, between Ole Miss and Texas A&M, for that matter.

Kiffin has things rolling in Oxford, though he will be a big target in this offseason’s coaching carousel, which should be electric. Fisher, meanwhile, only has job security due to a nearly nine-figure buyout.

Of course, anyone that hires the Ole Miss coach will have to do so knowing that he is likely to be near the top of Alabama’s wishlist when Saban retires.