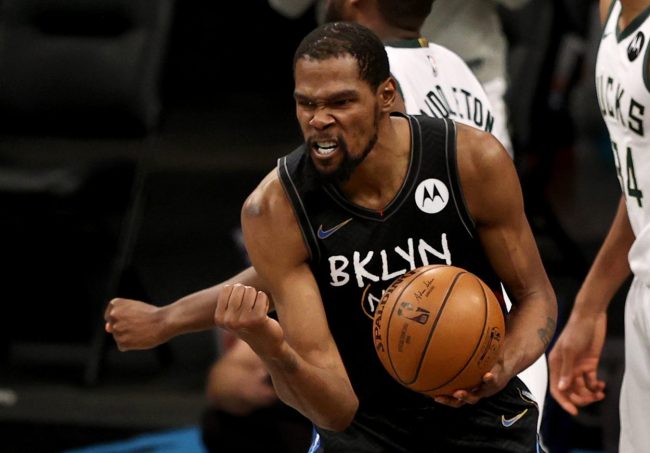 Kevin Durant’s intentions are clear. The NBA superstar and former league MVP wants out of Brooklyn. He’s made that intention clear to Brooklyn Nets owner Joe Tsai, who in turn backed coach Steve Nash and GM Sean Marks over Durant.

The market has changed drastically for Durant, with the Phoenix Suns looking the early favorite and Boston and Philadelphia making recent charges.

But now it appears Durant will have to wait in order to get what he wants, and he may have to wait a while. At least according ESPN’s Brian Windhorst,, who went on the network’s morning show “Get Up” and had this to say about a deal.

"Nothing has happened. The dynamic around Kevin Durant hasn't changed at all… Durant clearly does not have leverage with the Brooklyn Nets… We may be here at the end of August, we may be here in mid-September."

“Nothing. Nothing has happened,” Windhorst said. “The dynamic around Kevin Durant hasn’t changed at all. There hasn’t been an urgency in trade talks. There hasn’t been a change in strategy by the Brooklyn Nets. And I think what we have here is really a study of leverage. First off, the Nets do not have leverage in trade talks with other teams. They are not giving the offers that they want. They see no reason to increase them. And so, they are not making any progress there.”

That can’t be music to the ears of Durant or his suitors as it appears the Nets are willing to dig in and wait it out.

Durant currently has four years left on the extension he signed just last August. Something, somewhere is going to have to give.