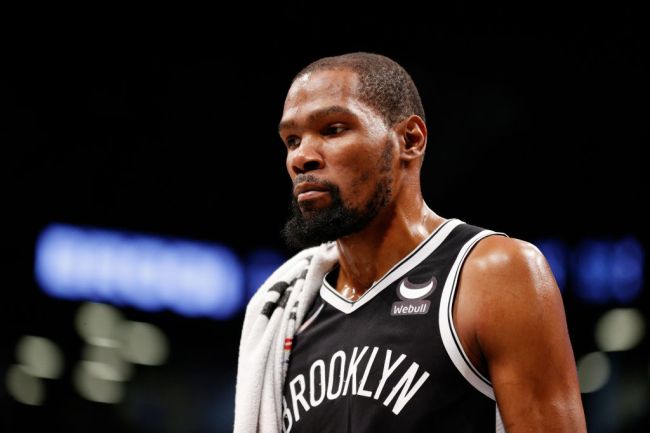 After catching a hilarious stray in a recent episode of “Hard Knocks,” Kevin Durant is setting the record straight on how often he does calf raises.

The Brooklyn Nets star’s workout routine was called into question on Wednesday after a clip featuring John Brown went viral. The former bodybuilder and father of Detroit wide receiver Amon-Ra St. Brown referenced Durant’s 2019 Achilles injury. Then seemingly out of nowhere, he asked KD a totally unnecessary (but way too funny) question: “When’s the last time you did a calf raise?”

With no clear path out of Brooklyn at the moment, it seems Durant may have felt the need to clear up any concerns. Of course, he’s also made a habit of defending himself on Twitter and this time was no different.

It appears today was leg day for KD and he let everyone know calf raises were included in the workout.

The fact fans expected a response like this might be the best part of it all. Brown’s comments were definitely uncalled for, but surely Durant has better things to do. Like more calf raises?

The response gave most fans a laugh, but some wanted more evidence than just a one-word tweet. Although, there’s probably a higher chance KD roasts them instead.

Video yourself doing a calf raise rn or you’re lying

You definitely don’t be doing calf raises, you can only dunk cuz u 7 feet💀

Given Durant’s attempt to force a trade in recent months, you’d expect him to be too busy to notice Brown’s comments, let alone respond. But if there’s anything we know about KD, it’s that he loves to tweet. At least everyone knows he hasn’t stopped training amidst all the trade drama.