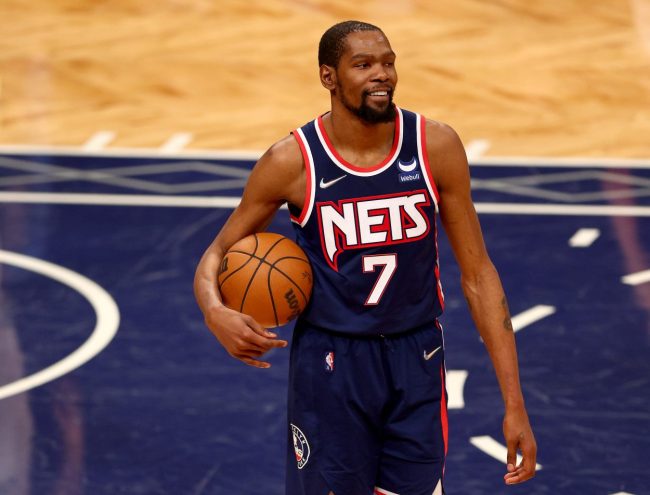 Forget about the Boston Celtics. The Philadelphia 76ers are old news, and it’s hard to remember that the Phoenix Suns were ever even a thing.

Brooklyn Nets owner Joe Tsai is playing hardball with want-away superstar Kevin Durant. That’s brought a number of unexpected teams to the forefront of trade talks. Shams Charania of The Athletic introduced even more teams to the part with a report on Monday morning.

A new Western Conference contender is expressing interest in Kevin Durant – fresh Inside Pass at @TheAthletic breaking down the latest on the Nets star:https://t.co/hprnn3hXj1

The first team that Charania discusses among surprise Western Conference pursuers is the New Orleans Pelicans. Though the NBA insider says the Pelicans have insisted on holding on to one surprise player.

“The New Orleans Pelicans inquired with the Nets on June 30 as well but deemed All-Star Brandon Ingram as untouchable, sources said.”

Charania also says that the Atlanta Hawks made an offer of a package involving John Collins, De’Andre Hunter and a draft pick. Though no deal ever came close.

Though those aren’t the only new teams that popped up. The latest one may surprise NBA fans.

“Recently, a new team has shown interest in Durant: the Memphis Grizzlies, league sources tell The Athletic. Fresh off a 56-win season, the Grizzlies have made new inquiries to the Nets about Durant, those sources added. Memphis has five first-round draft picks available (four unprotected selections of its own and one protected via Golden State in 2024) to theoretically utilize in a trade as well as young players like Jaren Jackson Jr., Desmond Bane, Ziaire Williams, Brandon Clarke, Kennedy Chandler and David Roddy.”

Charania adds that the Grizzlies have yet to include Jaren Jackson Jr. or Desmond Bane in a package and would prefer to primarily trade away draft picks.

Dame's not a superstar now?! https://t.co/KHUefuKGLN

KD and Ja Morant together in Memphis? We can already hear Grizzlies fans singing “Whoop that trick” from the championship parade route.