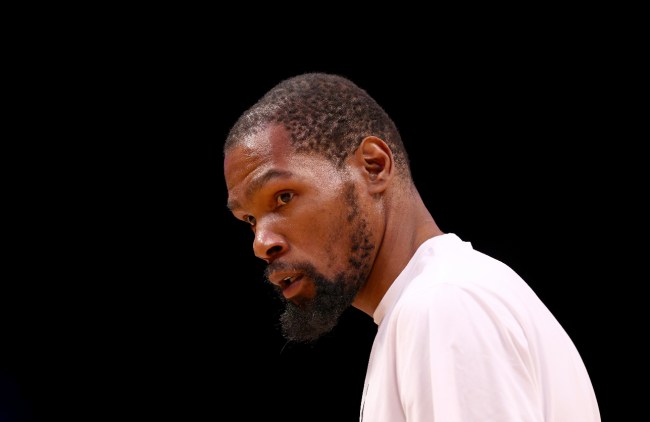 The dust has settled quite a bit in NBA free agency. The biggest reason why is the standstill of the Brooklyn Nets and superstars Kevin Durant and Kyrie Irving.

Irving has repeatedly been linked to the Los Angeles Lakers, and at this point, it would be shocking if a deal doesn’t go through.

However, Durant is the more interesting case, and nothing has surfaced yet. After requesting a trade and sending the NBA world into a frenzy, he has reportedly ‘gone dark,’ according to Chris Haynes of Yahoo Sports.

"KD has gone dark." @ChrisBHaynes and @VinceGoodwill go behind the scenes of the Nets and Kevin Durant trade talks on the latest Posted Up.

According to Haynes, various NBA stars have reached out and haven’t received a response. So, why could that be? Who knows, but then again, it is Kevin Durant.

Kevin Durant Is Off The Grid For The Time Being

This is somewhat strange. But perhaps Durant is tired of the constant trade rumors and buzz with his name tied to it all.

The Phoenix Suns emerged as a contender, but they then signed Devin Booker to a rich extension. The Toronto Raptors were another option, but reportedly they aren’t going to include Scottie Barnes.

So, Durant’s suitors are dwindling quickly, and the Nets might be inclined to keep him into the season.

"Maybe at some point the Nets come to Kevin Durant with a trade. … And he looks at it and says 'maybe i'd … rather stay here.'”

This saga is a tireless one, and it won’t end anytime soon if things keep going at this rate.