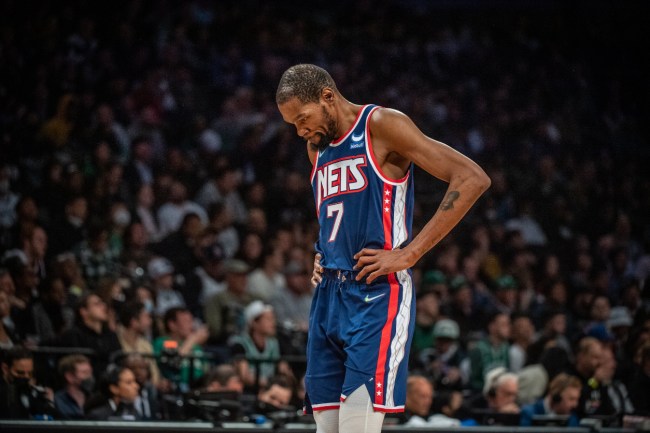 The Brooklyn Nets are sitting at home watching the Eastern Conference Finals and it can’t feel good. The situation with Kyrie Irving is up in the air, and now it appears that the future with Kevin Durant in Brooklyn is skeptical.

Kevin Durant and the Nets front office haven’t spoken since their season ended, per @Krisplashed pic.twitter.com/b0UP9IOBR8

The fact that Durant and the nets have not spoken is a concern for both sides. When Durant came to Brooklyn, a championship was the expectation.

It didn’t happen, and James Harden forced a trade to the Philadelphia 76ers, and Irving might not be back with the franchise in 2022-2023.

Kevin Durant might not be in Brooklyn next year and fans are already begging for his services.

If Durant doesn’t return to Brooklyn, he will easily be the most coveted player in the free-agent market. So, yeah, fans quickly prepared their pitches for Durant to join their respective teams.

Could put together a strong package with some combination of Demar, Ball, Coby White, Vooch expiring contract, or even a Lavine S&T

@KDTrey5 to the Mavs? Guaranteed championship. You know Luka would get you a good look at your will. KD with a Magic Johnson+ tier distributor? Omfg, you solidify consensus top 10 player of all time by the end of June 2023. Plus we getting Gobert or Turner this offseason. Plz KD

Others already had Durant photoshopped in different jerseys, including the Phoenix Suns and Miami Heat. The Golden State Warriors jersey needs no photoshopping, although Durant heading back to Golden State would be far from ideal.

Now, this silence between the two sides could be nothing. After all, do people normally speak to their bosses on vacation?

Regardless of all of that, the Nets have a ton of questions to answer this offseason, and there is a possibility that neither Irving nor Durant are playing in Brooklyn next season.