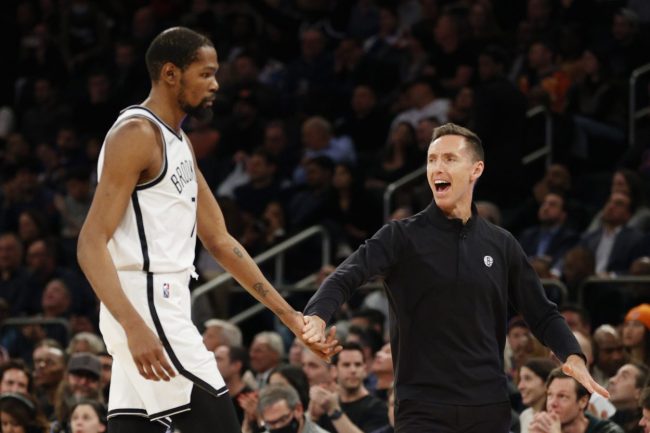 Things had seemingly gone cold on the Kevin Durant trade front of late. The Boston Celtics emerged as suitors for a brief while, but that has since gone quite. And Durant had reportedly “gone dark” since the news of his trade request broke.

Well, that all ended on Monday with a bombshell report from Shams Charania of the The Athletic.

In a meeting with Nets owner Joe Tsai, Kevin Durant reiterated his trade request and informed Tsai that Tsai needs to choose between Durant or the pairing of general manager Sean Marks and coach Steve Nash, sources say.

Charania repors that Durant has laid down a gauntlet to Brooklyn Nets owner Joe Tsai. Either Tsai trades the superstar, or head coach Steve Nash and general manager Sean Marks get the axe.

Sources: Kevin Durant informed Joe Tsai that he does not have faith in the Nets‘ direction. The meeting was described as transparent and professional, with a clear message: Keep me — or the GM and coach. https://t.co/W1voNf9MDC https://t.co/0lbBay2OxF

In a face-to-face meeting with Brooklyn Nets owner Joe Tsai over the weekend, All-NBA star Kevin Durant reiterated his trade request and informed Tsai that he needs to choose between Durant or the pairing of general manager Sean Marks and coach Steve Nash, sources tell The Athletic.

Durant stated he does not have faith in the team’s direction, sources said.

Durant and Tsai spoke in London on Saturday and sources described the discussion as transparent and professional. The meeting took place a year to the day that Durant agreed to a four-year, $198 million contract extension with the Nets and barely over a month after his initial trade request on June 30. He is now entering the first season of that extension.

The Phoenix Suns were thought to be the initial favorites to land Durant. But that went out the window when Phoenix matched the Indiana Pacers’ offer sheet for DeAndre Ayton.

The Miami Heat, Toronto Raports and Celtics now top that list according to Charania. Boston’s package reportedly surrounds All-Star forward Jaylen Brown, which appeared to have angered the budding star.

Paolo Banchero may just have to hold the L on this one. https://t.co/JdJAvJKcbr

Where Durant ends up is anyone’s guess, but it appears we may have a resolution in the near future.