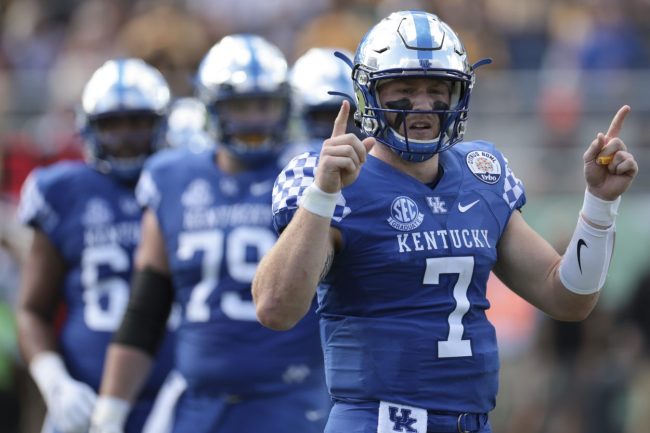 Will Levis has exploded onto the scene since transferring from Penn State to Kentucky. The rising senior threw for 2,826 yards and 24 touchdowns to lead the Wildcats to a 10-3 record in 2021. The Connecticut native had a massive arm and is rocketing up the boards for both Heisman Trophy odds  as well as the 2022 NFL Draft.

But Levis has also become a huge college football celebrity for other reasons. As it turns out, he’s a pretty odd dude who has some pretty strange eating habits.

His newest one, however, is the most disgusting of all and should absolutely kill his NFL Draft stock. Apparently Levis takes his coffee in an extremely unique way…with mayo.

Have you ever had Mayonnaise with your morning coffee?@UKFootball QB @will_levis is known to dabble w/ said combo 😳 pic.twitter.com/ZuR92Toa4m

Listen, I’m a coffee guy and a fervent mayo defender. In fact, mayo is incredible underrated and gets way too much hate.

Mayo is an elite condiment and the most versatile by far. https://t.co/257l337rKq

There’s also no way to say whether Levis is trolling or not. But he does take a sip of the coffee at the end. You could also justify the disgusting combination with the fact that adding fat to coffee slows down the digestion and absorption of caffeine, keeping you fueled longer.

But let’s face it. This is truly an indefensible act. More indefensible, even, than Levis in Kentucky’s 52-21 romp of in-state rival Louisville last season. And he had four touchdowns in that game!

Putting mayonnaise in coffee is a red flag that even the most arm-talent obsessed general manager shouldn’t ignore. Will Levis may well be a darn good quarterback, but he’s a questionable at best decision-maker.