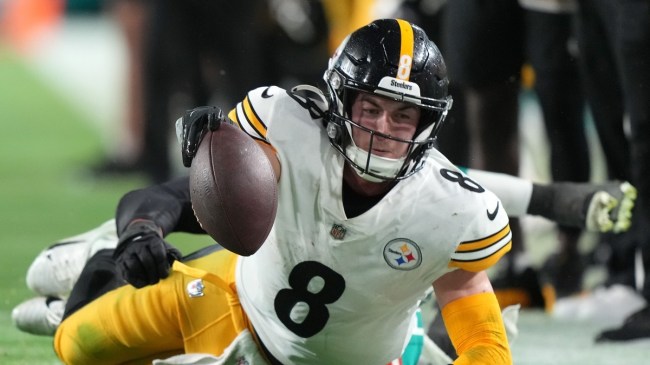 After Ben Roethlisberger retired after a sensational, eighteen-year career, Pittsburgh needed a solution at quarterback. So, they went out and signed Mitch Trubisky. But, they also used a first-round pick on Kenny Pickett out of the University of Pittsburhg. Pickett had lit it up in his senior year at Pitt, and the 24-year-old flew up draft boards. Pittsburgh thought he was a franchise quarterback, and snagged him.

Trubisky won the job to start the year, but Pickett ended up getting it for the week five start against the Bills. He’s struggled, though, and had four interceptions through his first three career games. He got the start on Sunday Night Football against the Miami Dolphins, and things didn’t go well.

Pickett was intercepted three times in the Pittsburgh loss

It was not a good night for Kenny Pickett and the Pittsburgh offense. He was 32-44 for only 257 yards, with one touchdown and three costly interceptions. The last two were late in the fourth quarter when the Steelers were trying to take the lead.

Jevon Holland with a potential game-changing INT late in the 4th! #FinsUp

Yikes. Those are not good throws and are two different kinds of mistakes. But, what’s clear in both is that Pickett does not have a good enough arm for this league.

Steelers fans are upset with his performance

It’s one of the most passionate fan bases in the league, and fans are fired up.

Pickett was neither pro-ready nor a high-floor prospect, so I’m not really sure why he was taken in the first round. Just really bad stuff.

The quarterback only had one good season at Pitt, and it was as a 23-year-old in a bad ACC.

Kenny Pickett is exactly who I thought he was.

In my opinion, people who actually know what they’re watching when it comes to quarterback play knew that he was not an NFL starting quarterback. Yes, it’s early, but he’s really not all that talented.

Y’all are the dumbest MF I have ever met

You have no idea how football works