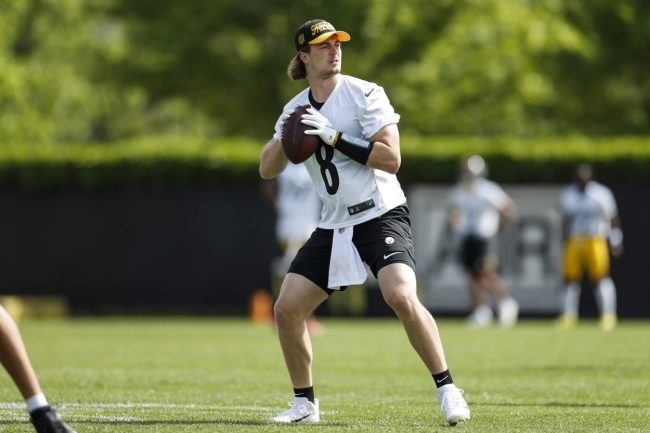 Following Ben Roethlisberger’s retirement, the Steelers have uncertainty at the position for the first time in 18 years. Mitch Trubisky seems to be the favorite for the job. But Pittsburgh also has veteran backup Mason Rudolph in the mix as well as rookie Kenny Pickett.

The Steelers drafted Pickett with the 20th pick of the 2022 NFL Draft after Pickett led the Pittsburgh Panthers to one of their best seasons in recent memory. One of the reasons Pickett lasted to pick No. 20 was because of his unusually small hands for an NFL quarterback. The issue hasn’t gone away since Pickett was drafted. A fumble in training camp brought Pickett’s hand size back to the forefront.

Now Pickett’s teammates are getting in on the jokes as well.

Cam Heyward is an 11-year NFL veteran and was named to the last five Pro Bowls. Heyward is also one of the team’s captains and an unquestionable leader in the locker room. He doesn’t seem to think Pickett’s hand size is an issue. But that hasn’t stopped him from coming up with a hilarious nickname for the rookie.

“I think it got blown out of proportion and then I just kind of ran with it. You know, why can’t I call my rookie quarterback ‘Burger King Hands’? He will be on the show later on and I will be giving him a hard time then, but, man, the dude can still play,” Heyward said on his podcast Not Just Football.

Heyward is, of course, referencing the famed “tiny hands” ad campaign that the fast food franchise ran years ago.

Unfortunately, it doesn’t look like Pickett will be able to parlay the “Burger King hands” nickname into a Heinz ketchup tandem sponsorship anytime soon.