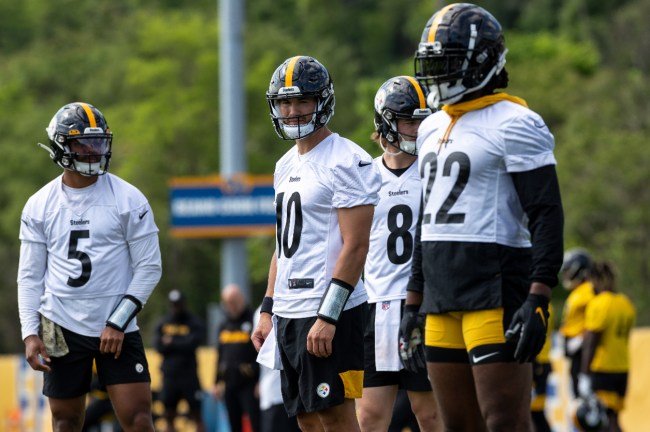 The Pittsburgh Steelers enter training camp with one of the most polarizing quarterback battles. Other teams have QB battles — the Seattle Seahawks have a strange one — but the Steelers are the most notable.

The expected starter, for the time being, is Mitchell Trubisky. However, the Steelers drafted Kenny Pickett in the first round of the 2022 NFL Draft out of Pittsburgh and have pegged him as the next franchise signal-caller.

The question is, will Pickett be ready this year to be the team’s starter? That remains to be seen, but his chances got a lot better with the latest report from Steelers beat writer Mark Kaboly of The Athletic.

If you are gauging Mitch Trubisky’s camp so far based on the Seven Shots drill, then it’s not a pretty camp for the veteran free-agent signee. Trubisky converted 3 of 4 (it should have been 4 of 4) the first day the Steelers ran the popular drill but has struggled since. He came into Tuesday’s practice having missed on 12 consecutive reps in the drill.

Trubisky wasn’t able to convert in four reps, extending his skid to 16 consecutive non-scoring plays. For the duration of camp, he’s 3 of 20. Of course, not all were his fault, but you definitely don’t want to see a goose egg for that long.

Oof. That isn’t good news for the Trubisky truthers. On the other hand, this is encouraging for the Kenny Pickett camp.

Trubisky still earned first-team reps, but if he keeps throwing goose eggs, as Kaboly mentions, Mike Tomlin and his staff might have no choice but to name Pickett as the starter.