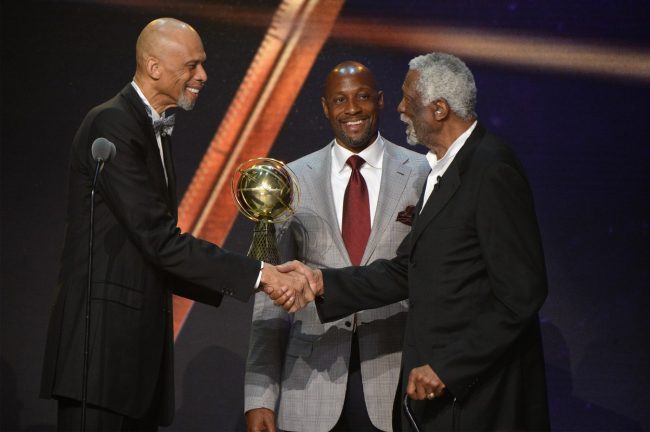 The basketball world lost a titanic figure in the form of Boston Celtics legend Bill Russell on Sunday. Russell was an 11-time NBA champion, a five-time NBA Most Valuable Player, 12-time NBA All-Star and a two-time NBA champ as a head coach. But more than that, he was the face of the early NBA and titan in the civil rights movement.

Those far and wide across the basketball world mourned Russell’s passing on Sunday. But on Monday, another NBA legend weighed in.

Kareem Talks About The First Time He Met Bill Russell

Kareem Abdul-Jabbar is considered by many to be the heir apparent to Russell. The next in a great line of NBA big men. The two eventually formed a strong friendship. Abdul-Jabbar wrote more about that friendship on Monday. Including a fantastic anecdote about the first time the two met.

Abdul-Jabbar recalled the time Russell and the Celtics were practicing in his high school gym in New York City.

I shuffled over to Coach Donahue, who introduced me to Coach Auerbach. Coach Auerbach gestured at Bill Russell. “Hey, Bill, c’mere. I want you to meet this kid.”

Bill Russell dipped down his newspaper and looked me over with a frown. Then he snorted. “I’m not getting up just to meet some kid.”

I shrank to about six inches tall. I just wanted to run straight home.

Auerbach chuckled. “Don’t let him get to you, kid. Sometimes he can be a real sourpuss.” He grabbed my wrist and walked me over to Russell.

“Bill, be nice. This is the kid who just might be the next you.”

Bill looked at me again, this time taking a little longer. I was already 7’, two inches taller than him.

I stuck out my hand. “How do you do, Mr. Russell. Pleasure to meet you.”

He didn’t smile, but his demeanor had softened, just a little. He shook my hand. “Yeah, yeah, kid.”

That’s how I met my childhood hero.

Jabbar went on to talk about how Russell inspired him and the friendship they shared later in life, including finally asking him for an autograph 53 years after they first me.

I whipped out the jersey from behind my back. His home jersey from the Celtics. Number 6. I held up a black Sharpie. “Mind autographing this for me?”

He gave me a long look, took the jersey and Sharpie, signed it, handed it back.

“Sure, kid,” he said. He had continued to call me kid since our first meeting when I was fourteen. I think that was his good-natured way of reminding me that he was there first and I would always be following in his giant steps.

And that was just fine with me.

The last time I saw Bill was last summer at a family barbecue at Lakers headquarters. He saw me walking toward him, smiled, and said, “Hello, kid.”

I smiled back and tried to think of how I would make him laugh.

There’s no doubt that Russell clearly left a lasting impression, especially on his fellow NBA great.