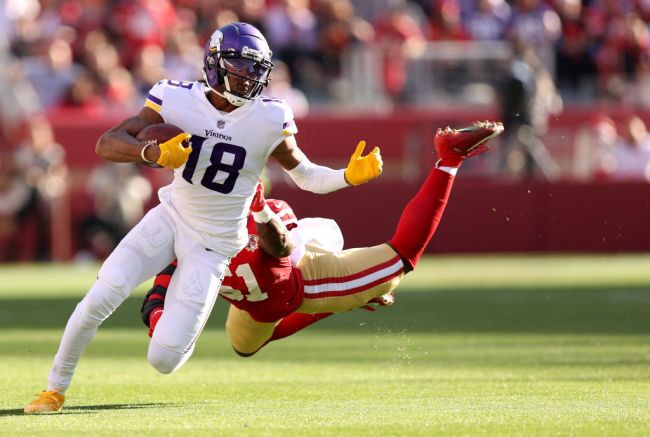 The Minnesota Vikings scored big when they drafted Justin Jefferson with the 22nd pick of the 2018 NFL Draft. In just two seasons, he’s already established himself as one of the best receivers in the league.

Jefferson joined the Vikings’ receiving corps alongside Adam Thielen and brought new life to the team’s offensive production. He quickly became a favorite target for quarterback Kirk Cousins with 17 touchdowns catches and over 3,000 yards so far. Now that former Rams offensive coordinator Kevin O’Connell has taken over the head coaching gig, the future is looking even brighter.

The Vikings began joint practices with the San Francisco 49ers on Wednesday and Jefferson gave fans a reason to get hyped. Off-season training appears to have paid off as he absolutely torches the 49ers’ secondary on multiple occasions.

#Vikings WR1 Justin Jefferson is ready for the season.

Jefferson isn’t showing any signs of slowing down going into his third NFL season. It’s quite the opposite as his moves found plenty of separation during the 1-on-1 drills.

The Vikings wide receiver has publicly stated his confidence in the team’s new system already and Wednesday’s practice showed exactly why. Jefferson put on a showing and nobody from the 49ers could stop him. His dominance continued into the scrimmage, where he delivered his filthiest move of the day.

It was a long day for the 49ers cornerbacks, who were without Emmanuel Mosely and Jimmie Ward, and Jefferson took advantage. Fans got a new look at the Viking’s pass-first offense and it’s heating up just in time for the season.

If Justin Jefferson keeps pulling moves like these, the Vikings can likely expect another monster year out of him.