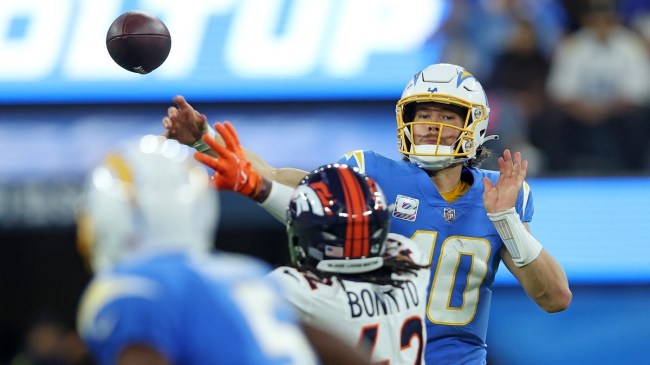 Justin Herbert is one of the most promising and prolific passers in all of football. The Los Angeles Chargers quarterback boasts a rocket and flexible arm and has good accuracy and anticipation to go along with plus athleticism.

Naturally, the day that Draftkings decides to basically give away free money, Herbert doesn’t get it done. The Chargers did win an ugly game, 19-16 in overtime, over the Broncos. But, no touchdown passes for Herbert and a whole hell of a lot of money for Draftkings.

Herbert was 37-57 for an abysmal 238 yards, no touchdowns and one interception. The only Charger to score was running back Austin Ekeler on a 6-yard run early in the 2nd quarter.

Naturally, those that wagered on what seemed like a sure win were upset. Some even thought it was fixed.

100% deleting DraftKings app. No way Justin Herbert throws a TD 30 games in a row then the one game he doesn’t DraftKings offers a boost -800 to +100. Hope that you guys sleep happy tonight.

Justin Herbert. 57 pass attempts, no TD pass completions. Has had a TD pass in 36/37 games. Draftkings offers a 1 TD pass boost. But nooooo, there’s nothing sketchy about this at all right? Sometimes it’s just too obvious.

Pretty odd that DraftKings boosted Justin Herbert -800 to +100 to throw a touchdown tonight just hours before kickoff. The integrity of sports is slowly deteriorating before our eyes for the sake of betting.

Now, if you ask me, these people are absolutely whiny babies. It’s not as if the regular odds of -800 were an implied 99.9% chance. Rather, it was an implied 88.5% chance. Guess, what, that means 12 out of 100 times it won’t happen. Much bigger upsets happen every weekend in college football.

That being said, Herbert lost a lot of fans Monday night.