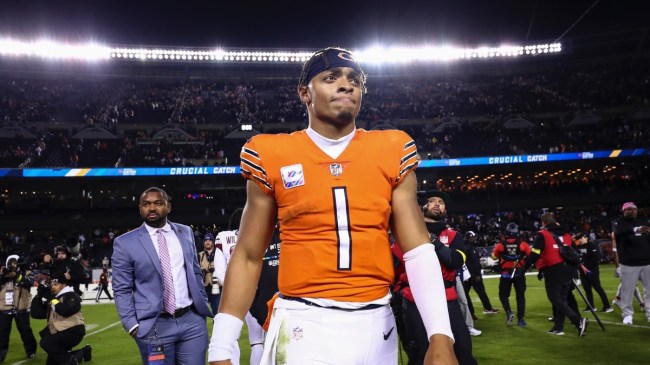 Justin Fields was supposed to be the quarterback that got the Chicago Bears back on track. The seemingly quarterback-cursed franchise selected Fields with the 11th pick in the 2021 draft in a pick that at the time was seen as a steal. After all, many had Fields as the 2nd-best quarterback in the draft behind Trevor Lawrence, and some even had him number one.

But, it has not gone smoothly. He has looked like one of the worst passers in the league in his career so far, and in sixteen career starts he now has 11 touchdowns and 15 picks after a terrible performance against the Washington Commanders on Thursday Night Football

Could the Chicago quarterback curse be continuing?

Many think Fields is already ruined

Opinions vary on whether he was going to be good, to begin with, or if people just overlooked his flaws and saw his impressive tools. But, pretty much everyone agrees he’s not playing well right now.

This take really isn’t that far off. He’s definitely in the bottom five.

Justin Fields is the worst QB in the NFL

Here are a collection of a few brutal tweets about the second-year player.

Justin Fields is who Lamar Jackson haters think Lamar is

Fields looks so lost. Like, “should not be in the league” lost. Not sure what the deal is, but good case here that he never had a chance and someone needs to stage an exfil mission https://t.co/oubI667g8Z

Some think it isn’t his fault, though.

If you blame Fields you’re just a hater and don’t know anything about football.. O-line can’t protect him. WRs dropping passes

But, after the failure of 2017 2nd-overall pick Mitch Trubisky and now the poor play of Fields, some have to wonder if it is indeed just the Bears, and not the quarterbacks themselves, that is the issue.