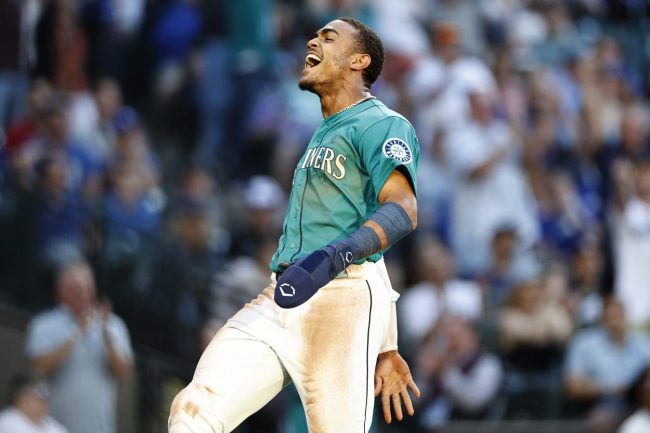 Julio Rodriguez is a bonafide superstar. The 21-year-old Mariners outfielder has electrified the city of Seattle in his rookie season with both his bat and his glove. Rodriguez has 15 home runs and 50 RBI this year and features an absolutely freaky right arm that he’s used to gun down runners on the base paths.

Three days ago, Major League Baseball announced that the wonderkid would be an American League All-Star in his first season in the big leagues. But Mariners fans wanted more. They wanted to see their young stud compete in the Home Run Derby at LA’s Dodger Stadium as well.

Well, they’re going to get their wish.

Rodriguez announced on Twitter Wednesday that he will participate in the 2022 MLB Home Run Derby. He joins an absolutely star-studded field alongside the following players:

Two more entrants are set to be announced before the event on Monday, July 18 and 8 p.m. ET.

Mariners fans are absolutely amped at the news.

Might have to cop a JROD all star jersey now. https://t.co/QoHjikiZz3

Rodriguez would become the youngest ever winner of the derby should he top the loaded field.

Julio Rodríguez will look to become the youngest Derby winner in history — by more than two years — and just the third rookie to win it outright, along with Aaron Judge (2017) and Pete Alonso (2019). https://t.co/57kvWAKm52

And Seattle fans are already bringing up memories of another young Mariners slugger that took the world by storm in the Home Run Derby.

If he comes out with his hat on backwards I'm betting the farm on the #JRODSHOW https://t.co/ACfp3cW918 pic.twitter.com/GF3nCd4gQh

I really hope he goes out there with his hat on backwards. https://t.co/ufsrxHQwLc pic.twitter.com/e4rFS1QTLI

Julio Rodriguez is one of the most exciting players in Major League Baseball today, and fans are about to be in for a treat with him competing against the league’s other top stars.