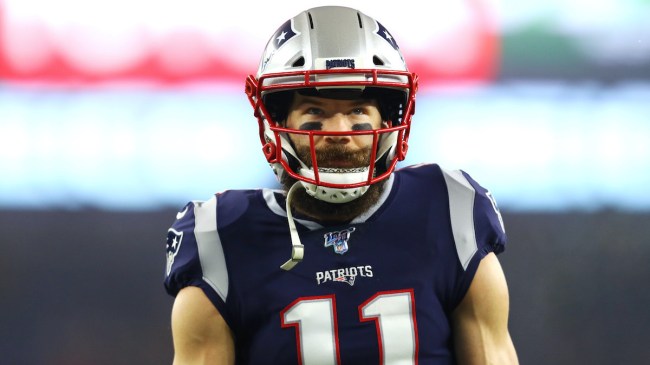 Julian Edelman retired from the NFL in 2021, but it appears one Miami Dolphins fan is still bitter about the receiver’s time in New England.

Edelman played an instrumental role in the New England Patriots’ success, tallying 6,822 yards, 32 touchdowns, and 620 receptions in his 12-year career. The Miami Dolphins, being in the NFC East, were on the (pun intended) receiving end of Edelman’s production more often than they would have liked.

It seems time has yet to heal those wounds for some. In a video posted to Twitter on Wednesday, a Dolphins fan was asked who has the most punchable face in the NFL. He immediately names Edelman despite the fact that the 3-time Super Bowl winner is already retired.

The news got around and Edelman eventually saw the clip himself. Understandably, he was surprised by the fan’s apparent grudge. The dig comes out of nowhere and the fan even adds “f*ck that guy” to the end of his answer.

Edelman was most dangerous during the playoffs, but the Dolphins never faced him there. The hatred would make more sense coming from Falcons fans. After all, Edelman delivered arguably the greatest catch in Super Bowl history during the Patriots’ historic comeback against them.

Even Seahawks fans, whose hopes were crushed by his Super Bowl-winning touchdown in 2014, would have more reason for the insult.

It’s unlikely that Edelman is actually bothered though. The Dolphins happen to be the team he’s scored the most touchdowns (7) and had the most receiving yards (951) against. He went on to comment as such, claiming he was “still living rent free” in the Dolphin fan’s mind.

The New England Patriots will travel to Miami for their season opener on September 11th. It’ll be a very different Patriots team from years past, but that’s a good thing for Miami. The Dolphins swept their AFC East rivals for the first time since 2000 last season. So they’ll look to repeat it with the Patriots still rebuilding.

Luckily for this Dolphins fan, Julian Edelman won’t be on the field any longer.