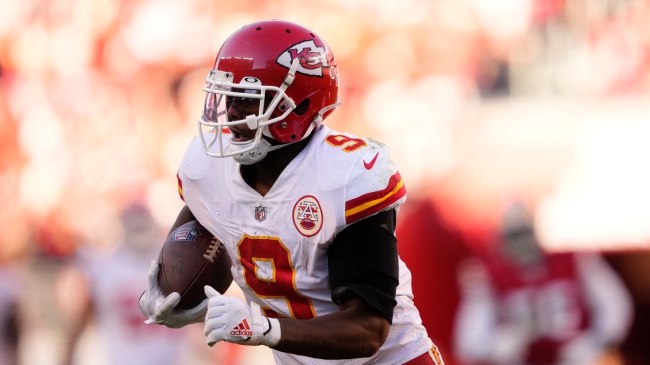 It’s a new-look Chiefs offense this year. Tyreek Hill was traded to Miami, and Juju Smith-Schuster, among others, joined Travis Kelce and Mahomes as stars of the Kansas City offense.

They haven’t missed much of a beat though. Andy Reid remains one of the great offensive minds in NFL history and his offense is starting to click. Smith-Schuster has an interesting reason why he thinks that is.

Kansas City wracked up over 500 total yards of offense, including 434 yards passing by Patrick Mahomes, in a dominant 43-24 win over the 49ers on Sunday. Smith-Schuster thinks he knows why the offense played so well.

#Chiefs WR JuJu Smith-Schuster says that playing Call of Duty: Warzone with Patrick Mahomes, Travis Kelce and MVS on Friday – they won three games in a row. He says that is what was the difference in their chemistry today.

For those who are initiated, Call Of Duty: Warzone is a first-person-shooter, battle royale game where you can either play solo or team up with a few friends in an attempt to eliminate the rest of the players or teams. At advanced levels, it takes a lot of good teamwork and planning, and winning a round is pretty difficult. To win three in one day is a pretty decent day, for sure.

The three receivers combined for 13 catches for 333 yards and a touchdown on Sunday, and that shows just how much chemistry they had with their quarterback, Patrick Mahomes. I’m not sure how much playing the game actually translates, but they think it does, and that’s all that matters.

The Chiefs stand at 5-2 and head into a bye in week eight. They will face the Titans on Sunday night football after the bye.