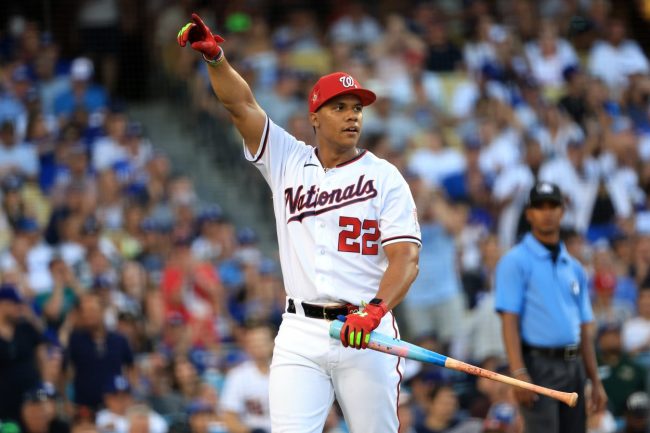 Juan Soto is one of the most prodigious talents in baseball history.

And yet Washington doesn’t want to seem to pay Soto what he’s worth to lock him up for essentially the rest of his career. If that sounds crazy to you, rest assured the baseball world feels the same way.

That’s even more true after Soto’s incredible MLB Home Run Derby showing on Monday night. Soto was incredible throughout the competition. He began with 18 home runs to knock out Cleveland Indiana third baseman Jose Ramirez. He then took out surprise semifinal Albert Pujols with 16 home runs in the second round.

Then, in the finals he squared off with Seattle Mariners phenom Julio Rodriguez. Rodriguez had stolen the show previously. The rookie hit an unreal 32 home runs to beat Texas Rangers star Corey Seager in round one and then backed it up with 31 to beat two-time defending champ Pete Alonso of the New York Mets in the semis.

Rodriguez put up an impressive 18 count in the finals, but it was Soto who stole the show. The Nats superstar hit 19, passing Rodriguez with plenty of time in hand to take home the title.

Nationals Fans Have A Very Loud, Very Clear Message For The Organization

Nats fans were pumped up to see their player win. But that immediately changed to ire toward the club, which could well let the player walk in a trade in the coming weeks.

I will never understand not simply giving him a blank check. Whatever he wants, he gets. https://t.co/mhb1ETQvcF

Pay him what he wants you clowns https://t.co/21vSaMn9q7

The last Nationals player to win the Home Run Derby was Bryce Harper in 2018. Harper then left the team the following offseason for the Philadelphia Phillies. Could we be in for a repeat with Soto?