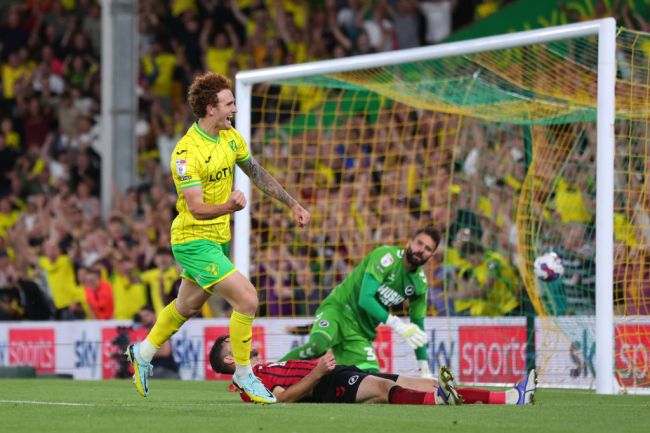 In recent years, more and more Americans are migrating to Europe to compete in the world’s top divisions of football, including USMNT’s Josh Sargent.

The Missouri native first joined German club Werder Bremen in 2017 before making his way to Premier League club Norwich City in 2021. Unfortunately, he dealt with an ankle injury that ultimately brought an abrupt end to his season. Then the team was relegated to the second division of English football.

As the 2022-23 EFL Championship season begins, it seems Sargent and Norwich City are off to a much better start. On Tuesday, he scored a brace against Milwall and the club showed its appreciation by blasting “Born in the USA” afterward.

“BORN IN THE USA” BLASTING AT NORWICH’S CARROW ROAD AFTER JOSH SARGENT BRACE.

The St. Louis-area product banged in both goals in a 2-0 win over Milwall. He has three goals in his last two games in the Championship. 🇺🇸🫡🔥pic.twitter.com/urBSYq8vhL

Sargent was the only goal scorer in Norwich’s 2-0 victory, finding the net first in the 50th minute and again in the 75th minute. The two goals lifted the English side to 5th in the EFL Championship standings.

Clearly, Norwich City was enjoying his Man of the Match performance. The fact they blasted Bruce Springsteen’s anti-war anthem is pretty awesome. It also made for a funny moment given where the club is located.

The USMNT striker has now scored three goals in his last two games for the English side. With his last appearance for the U.S. national team being in September 2021, American soccer fans are ready for him to return.

Does he deserve another look by the USMNT? pic.twitter.com/vUn8gQ7kXn

Expectations are high for the United States heading into the World Cup this November. They already have a talented core of young players which includes Christian Pulisic, Gio Reyna, Weston McKennie, Sergiño Dest, Tyler Adams, and Brendan Aaronson. But if they want to make it far in Qatar, they’ll need a strong striking presence.

Glazers out and Elon Musk in?https://t.co/Ser9gSzKRu

Young Boys’ Jordan Pefok and FC Augsburg’s Ricardo Pepi are among the candidates to be the team’s starting striker. It won’t be easy for Norwich City’s Josh Sargent to stand out but he’s off to a hot start.