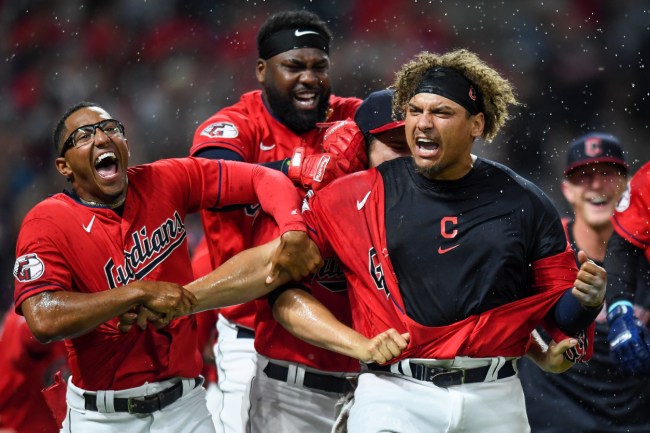 Josh Naylor — who has had a flair for the dramatic this season — smacked a game-winning two-run homer to send Progressive Field into a wild celebration.

Naylor gives the Guardians a victory, and again he went bonkers.

Josh Naylor Goes Wild After Giving The Guardians The Victory

This time, Naylor smacked himself in the head and headbutted Terry Francona, who was wearing a helmet. Seriously.

Mississauga's Josh Naylor's parents used to call him the Tasmanian devil. Now you know why.

Josh Naylor explains HR celebration after 2nd of the game vs White Sox:

"That was for Tim Anderson. I'm tired of his bat flips so I flipped out on him. I hope more guys bring the smoke like me. We need crazy celebrations to attract a young audience anyway." pic.twitter.com/oWFYlPvYYc

This time, Naylor went even further in a wild back and forth finish between two American League Central rivals.

Even a cold ice bath couldn’t stop Naylor from being hyped more than we have ever seen.

Josh Naylor did it again — the Guardians walk-off with the home run to beat the Twins in 10 innings, 7-6 ⚾️ pic.twitter.com/c0kFbyg0K3

The Guardians have been struggling as of late, losing five straight before winning two of three against the Twins. So, who can blame Naylor for sending the home fans away with a monster home run?

But, perhaps the celebration will be remembered for a long time, and hopefully Naylor’s head is ok.