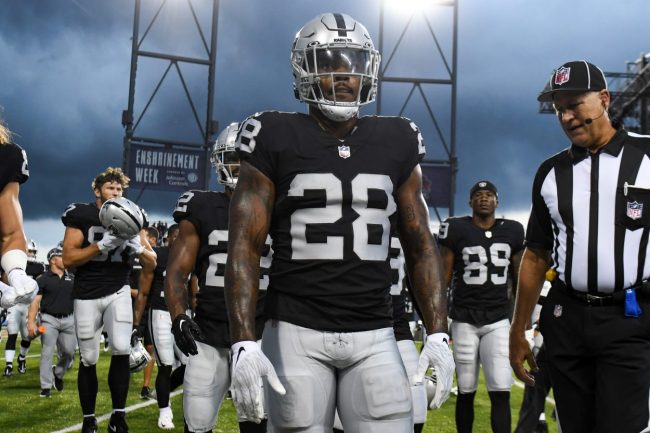 Josh Jacobs has been one of the best running backs in the NFL since being drafted by the (then) Oakland Raiders with the 24th overall pick in the 2019 NFL Draft.

Jacobs impressed right away as a rookie, carrying the ball 242 times for 1,150 yards and seven touchdowns. In his second season, Jacobs took his game to another level. The Alabama rushed for 1,065 yards and 12 scores in addition to hauling in 33 passes for 238 yards en route to Pro Bowl selection.

The star back continued that trajectory in 2021. Jacobs’ rushing totals went down, with just 217 carries for 872 yards and nine touchdowns. But he became much more of a weapon in the passing game. Jacobs caught a career-high 54 balls for 348 yards.

Despite his impressive production, Las Vegas declined Jacobs’ fifth-year option in his rookie contract. That led to speculation from some that the Raiders may be looking to move on from him in favor of younger options. But head coach Josh McDaniels put the kibosh on that on Monday morning.

Josh McDaniels: We have no desire to trade Josh Jacobs. https://t.co/yyLI2IiRuo

“JJ’s a guy we know what he’s done. We have a lot of confidence in JJ. He did well with his opportunities. We have no desire to do that at all,” McDaniels said when asked about a potential trade.

As Josh Alper of Pro Football Talk points out, actions offer differ from words when it comes to star players and trade talks. But Jacobs did feature in the Raiders’ 27-11 victory over Travon Walker and the Jacksonville Jaguars.