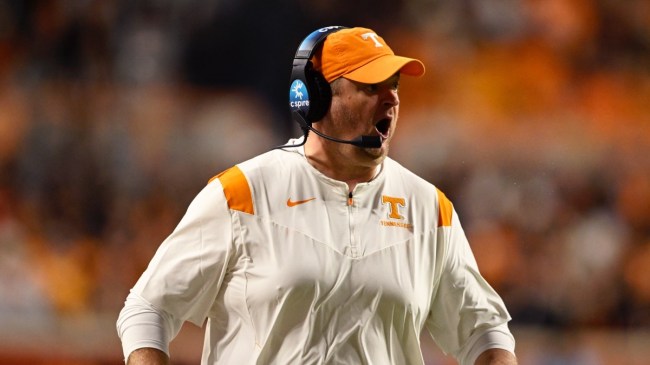 Getty Image / KNOXVILLE, TENNESSEE - OCTOBER 29: Head coach Josh Heupel of the Tennessee Volunteers runs down the sideline in the first quarter of the game against the Kentucky Wildcats at Neyland Stadium on October 29, 2022 in Knoxville, Tennessee. (Photo by Eakin Howard/Getty Images)

Georgia-Tennessee may be the most anticipated game of the college football season so far. The two teams will likely be ranked first and second in the first edition of the college football playoff rankings released Tuesday evening. That’s not surprising for the defending national champion Georgia Bulldogs. But, Tennessee has been quite the cinderella story after years of mediocrity. Their win over Alabama announced the program’s return to the national scene for good. And, quarterback Hendon Hooker is now the favorite to win the Heisman Trophy. He would be the first Tennessee player to ever win the award.

But, that Alabama game was in the friendly confines of Neyland Stadium. And, it’s hard to argue the crowd helped the Volunteers that night, as it was an electric atmosphere. But, they’ll have to go to a raucous Sanford Stadium on Saturday if they want to keep their undefeated season alive and take total control of the SEC East. As most teams do, Tennessee is practicing dealing with the crowd noise. And, when asked for the specifics, head coach Josh Heupel had a hilarious answer.

Heupel was asked about the preparation for the Georgia game, and his response was hilarious.

Josh Heupel on preparing his team for the noise on Saturday in Sanford Stadium: “Yeah we brought in a couple hundred seals and dangled fish above them during practice. It basically gave us the same look and sound as what we’ll encounter between the hedges this weekend.”

While it seems like a complete non-answer, it does show that Heupel is not taking the crowd lightly. That Georgia crowd, aside from fans being known to literally bark at other human beings, is genuinely a good crowd. And, the fans at Sanford Stadium can feel like they’re on top of you due to the design of the stadium. If the Volunteers want to win, a win I think would mean they would have to lose twice to miss the college football playoff, they will have to handle a raucous Bulldog crowd.