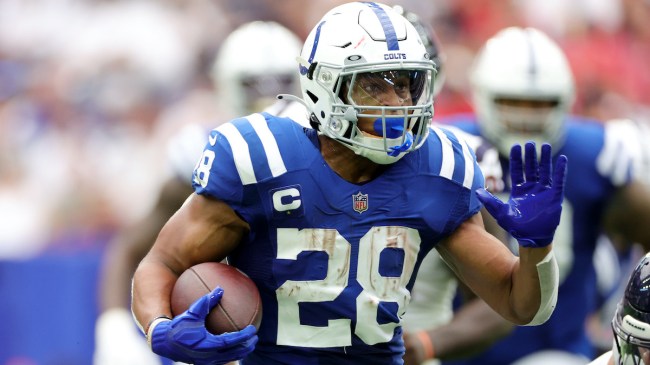 The Indianapolis Colts’ run game has struggled through their first four games and it’s not looking any more promising now that star running back Jonathan Taylor has been ruled out for Week 5.

The Colts RB suffered an ankle injury during the 4th quarter of their 24-17 loss to the Tennessee Titans on Sunday. With a quick turnaround for Thursday Night Football, it was uncertain whether he would recover in time.

On Wednesday, the Colts officially announced that Taylor would not suit up against the Denver Broncos. After missing the first practice of his entire football career just a week ago, he’ll now miss his first game due to injury.

The #Colts ruled out RB Jonathan Taylor (ankle) for tomorrow night vs. the #Broncos.

While Taylor’s production has slowed since an explosive Week 1 performance, it’s still a major loss for the Colts’ struggling offense. He leads the team in rushing with 328 yards on 81 carries through the first four weeks.

To make matters worse, the Colts will also be without a star player on the defensive side. Linebacker Shaquille Lenoard was ruled out along with Taylor after suffering a concussion and broken nose last week.

No Jonathan Taylor, no Shaquille Leonard for Indianapolis. Colts without two of their best players — and their most impactful non-QBs.

Broncos gotta get this one.

The injury news isn’t good for Amazon Prime either. Their Thursday Night Football broadcasts have already received criticism for a number of reasons and the ratings have been underwhelming in comparison to previous years.

The absence of both teams’ star running backs this week isn’t going to help. Broncos’ Javonte Williams is out for the season after tearing his ACL and LCL on Sunday. So fans will have to settle for a battle of the backups instead.

We went from having Jonathan Taylor vs. Javonte Williams to being treated to Nyheim Hines vs. Mike Boone. Thanks, I hate it here.

It’s a tough situation all around, but fantasy football managers were definitely the most vocal about their frustrations. Taylor was widely considered the No. 1 fantasy running back going into the season and has simply not lived up to the hype.

He led the NFL in rushing last season but lacks that consistency so far in 2022. Taylor put up 161 yards and a touchdown in the Colts’ season opener but hasn’t found the endzone since. Through four weeks, he is averaging 82 yards per game and isn’t even a top 20 fantasy RB.

Jonathan taylor was the worst first pick ever in fantasy history

However, fantasy football managers with Taylor on their roster shouldn’t give up hope quite yet. It’s worth noting that the Colts running back had a similarly slow start last season.

Taylor was outside of the top 20 after Week 4 in 2021 but picked up his production soon after. It’s certainly possible that the same could happen this season.

Through the first four weeks last year, Jonathan Taylor was 24th amongst RBs in fantasy PPG. He finished the season as the overall RB1.

Through the first four weeks this year, Jonathan Taylor is currently 24th amongst RBs in fantasy PPG.

Luckily for Colts fans, it appears Taylor’s injury won’t keep him out for too long. In the meantime, Nyheim Hines will serve as the team’s lead option. Deon Jackson and Phillip Lindsay could also see some touches too.

The Colts (1-2-1) will hope to get their season on track even without Jonathan Taylor, but it won’t be easy as the underdogs going into Thursday night against the Broncos (2-2).