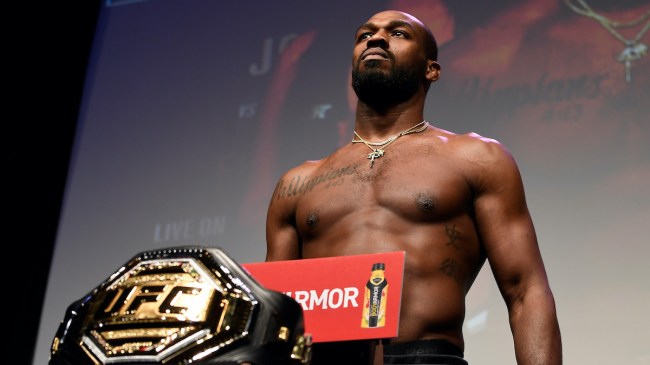 Nearly three years have passed since Jon Jones last fought and it appears he’s hungry to step back into the Octagon.

The former two-time Light Heavyweight Champion defeated Dominick Reyes at UFC 247 back in 2020. Then he vacated the belt after a dispute over pay with Dana White and has been training for a move up to heavyweight ever since.

In the past year, Jones has teased several potential super fights for his return. Earlier reports from October stated the UFC was in talks with Jones for a Dec. 10 main event against Stipe Miocic, but no further updates came.

It seems Jones is now tired of waiting too. On Thursday, he took to Twitter to publicly call out Miocic and demanded that he sign the contract for UFC 282.

I’m bringing all the heat @Stipemiocic, I got that fire you could never put out. Sign the contract #Ufc282

Despite the UFC already announcing Jiri Prochazka vs. Glover Teixeira 2 as the UFC 282 headliner in a release, it seems the door hasn’t closed for Jon Jones vs. Stipe Miocic.

Jones’ latest comment certainly suggests there’s still a possibility for an addition to the lineup. The UFC has experience with last-minute changes after all. They didn’t have the UFC 279 fight card figured out until one day before, so there’s plenty of time until UFC 282 in comparison.

Ultimately, the decision appears to lie with Miocic at the moment. The former two-time UFC Heavyweight Champion hasn’t fought since he lost the title to Francis Ngannou at UFC 260 in March 2021. It remains unclear if he’s actually interested in returning.

Jones, on the other hand, is fully on board and has repeatedly stated his desire to fight Miocic over Ngannou.

At this point I’m looking to fight Stipe, I think it proves a lot more. Fighting a fairly one-dimensional fighter fresh off of knee surgery. I don’t know, I believe beating Stipe says more at this point https://t.co/ki2ts67EyI

Fans will have to wait and see if a deal gets done. If not, Jones’ return to the UFC won’t happen until 2023 and he’ll most likely face Ngannou.