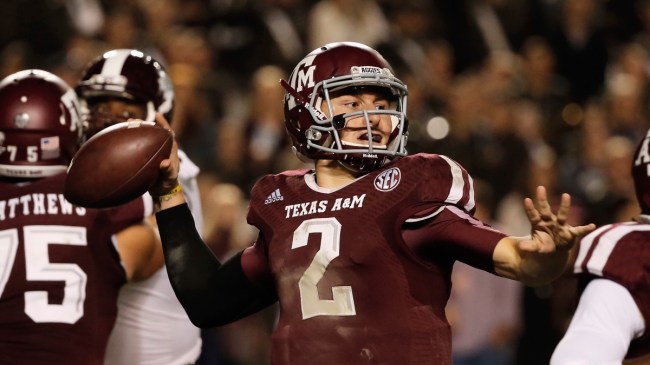 There’s no doubt that Johnny Manziel is an Aggie legend. The quarterback started at Texas A&M in the 2012 and 2013 seasons and captured the Heisman trophy in 2012 before being a finalist in 2013. His NFL career didn’t work out to say the least, but he’s absolutely the most famous Texas A&M college football player ever. And, he did something that is nearly impossible. He made Texas A&M cool.

So, after Texas A&M failed to score to win the game from the Alabama 3-yard-line with three seconds remaining in the game on a play that never had a chance, Manziel had some choice words for head coach Jimbo Fisher.

With Alabama’s Heisman Trophy Quarterback Bryce Young out due to an injury, The Crimson Tide offense struggled. They turned the ball over and had two missed field goals. After a pass interference in the end zone with three seconds left, Texas A&M had one play from the two-yard-line to win the game, trailing 24-20. This is what supposed quarterback whisperer Jimbo Fisher came up with.

Texas A&M with a chance to pull the upset of the year anddddddddd Jimbo Fisher with the worst play call of the day pic.twitter.com/RPlajVtoqQ

Pre-snap, Alabama is clearly playing man coverage, as most teams would down here. Yet, A&M has no crossing routes, no picks, no switch releases. It’s a disaster of a call and it turned out exactly how it should’ve.

Naturally, Manziel had to chime in with his opinion.

Johnny is right. It is a terrible call. Any madden player in the world worth a damn is making a better call than that. And yet, Jimbo Fisher, making $10 million this year, called that play.

The college football world was in shock, too.


Brandon Walker is right. But, it was indeed his play call.

That can’t be your play call, Jimbo.

A magic eight-ball has better instincts than Jimbo does.

Did that play call come up on Jimbo Fisher’s magic eight ball? That was brutally bad.