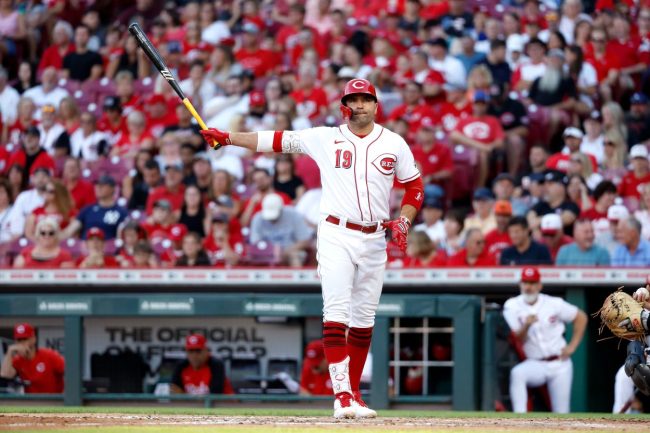 Joey Votto and Cincinnati Reds haven’t exactly had a season to remember. The Reds currently have fifth-worst record in the league at 44-60 and Votto is batting just .215 with 11 home runs and 40 RBI in 85 games played.

But Votto’s legacy as an all-time great in Cincy is set in stone. The Toronto native has played all 16 of his Major League seasons with the Reds and made six MLB All-Star games. He won the National League MVP award in 2010 and a Gold Glove at first base in 2011.

On Friday, Votto will get to have a rare first in his illustrious career. The slugger will lead the Reds into action in the second annual MLB Field of Dreams game.

While the game is special for baseball fans and players everywhere, it holds a special meaning to Votto. He explained just how much it meant to him in a heartfelt Twitter thread on Wednesday evening.

Watching Field of Dreams before the game tomorrow. I thought I would share a few thoughts about what the movie and this trip mean to me.

Votto started by explaining that he, like most kids who grew up as baseball fans, watched the movie often.

I was raised on this movie. My family had a collection of VHS tapes and one of them was Field of Dreams. I would watch it often. (🚨spoilers ahead)

He added that he and his father, like the main character in the movie, would often have a catch and that it’s something that helped forge their relationship.

From 8 or 9 years old, my father and I would play catch together. In retrospect, to me, it was the most important thing we did together. It strengthened our bond. In Field of Dreams, the movie ends with the main character, Ray, and the ghost of his father having “a catch”.

Votto then let people know that his father passed away 14 years ago, and that he feels an “emotional connection” with a particularly scene in the movie.

My father passed away 14+ years ago. So it is impossible for me not to feel an emotional connection to the moment where Ray asks his father for a catch. One more moment together.

Now, the future Baseball Hall of Famer will get the chance to play at the very site of the movie, and he’s making sure to take it all in.

Getting the opportunity to play a game at the mythical field that sowed the seeds of hope for a Major League Baseball career is a significant moment for me. Couple that with the father/son connection, and this game is an exceptional moment in my life.

Votto’s contract with the Reds expires after the 2023 season, though the team does hold a club option for 2024.

Better put a case on that phone! 😓 https://t.co/ovmXl2oVh6

If he chooses to retire following that season, he’ll do so as one of the all-time greats of game.