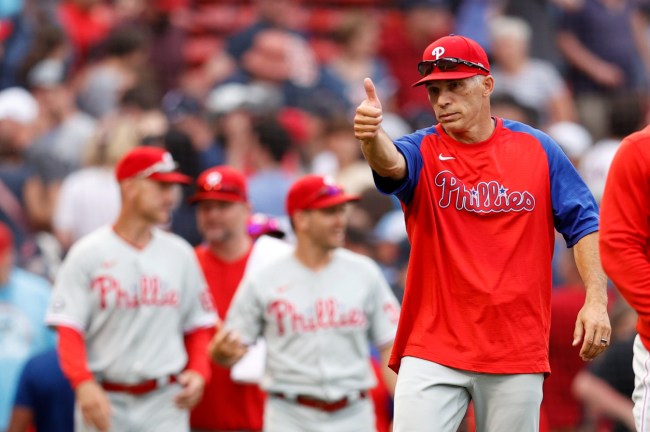 Former Philadelphia Phillies manager Joe Girardi received the bad news of his firing on Friday morning after starting the 2022 campaign with a 22-29 record.

Was it surprising? Not entirely. Still, being fired is never easy for anybody, especially a seasoned veteran like Girardi.

Shortly after Girardi was fired, he still joined MLB Network Radio for his weekly interview time slot and was asked a series of questions about what lies ahead for him.

Girardi could have easily canceled his interview. But he didn’t. Instead, he hopped on and answered a series of questions about his Phillies tenure, bench coach and new interim manager Rob Thomson, and his plans for the immediate future.

Joe Girardi got fired like an hour ago and he's still calling into his weekly spot on @MLBNetworkRadio. I respect that.

Girardi was a class act on the radio segment and never once spoke any bad words about the Phillies. Instead, he raved about the front office, Thomson, and admitted he is excited to spend some time with his family.

Here is a thread of Girardi’s interview.

Girardi: "I wish them nothing but the best of luck. I think there's more talent in that room than the way that we have played. And I hope for the Middletons and the Bucks and the organization that they can turn this around and get to the playoffs."

Here’s what Girardi had to say about Thomson.

Girardi on Rob Thomson “he’s the best coach I’ve ever been around …. He has great baseball sense … and was deserving of this role a long time ago “ @MLBNetworkRadio

That is a massive compliment from the veteran MLB manager, and Girardi is rooting for the Phillies all the way through.

Here’s a soundbite from his MLB Network interview as well.

"I just pray that they get better, and they get to the playoffs."

All in all, this must have been extremely difficult for Girardi to do, but he hopped on and was a true man of his word when he simply could have decided to cancel the segment.

Here is to hoping Girardi makes a return to the MLB sooner rather than later.